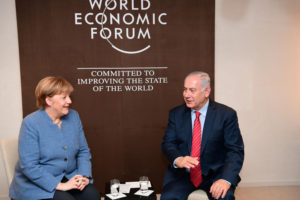 While the German Chancellor acknowledged the potential ramifications of the current Iranian nuclear deal with regard to Israel, in particular, she did not see eye-to-eye with Netanyahu on the matter and explained that the Europeans would hold discussions among themselves and with the United States.

The Israeli prime minister was, nevertheless, satisfied with “Merkel’s genuine commitment to the security of Israel,” the statement read.

The Israeli prime minister also discussed the Iran nuclear deal with his Canadian and Belgian counterparts as well as Swiss President Alain Bersetand, calling on them “to utilize the opportunity that has been created in the wake of US President Donald Trump’s declaration” on the issue.

Netanyahu vowed that he would not let Iran establish a military presence in Syria, which Israel is currently working to prevent.

Regarding the Palestinian conflict, Netanyahu said he would not “compromise on Israel’s security needs in any future agreement.”

The Israelis are reportedly trying to snag a meeting with Jordan’s King Abdullah II, after the two countries struck a deal that ended a six-months long diplomatic stand-off.

The prime minister invited all three leaders to visit Israel and “expressed his desire to deepen the economic and technological cooperation with Canada, Belgium, and Switzerland.”

The Israeli prime minister spoke with his Canadian counterpart about advancing their existing free trade agreement and with the Swiss president about opening new avenues for economic cooperation.

Azerbaijan, which borders Iran, is officially secular, though nearly all its 10 million citizens are Muslims. Baku and Jerusalem have long had strong relations, with the former purchasing weapons and selling Israel oil.

The world’s corporate and political elite had warned against creeping resistance to globalization and free trade on Tuesday during day two of the World Economic Forum in Davos, Switzerland.