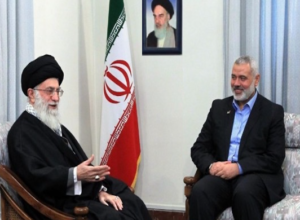 Iran-Hamas relations have renewed amid Gulf States drawing lines, forcing countries to expel Hamas operatives and boycott Qatar, so Iran has once again ‘adopted’ Hamas …now that billion$ have been given to them.

A senior Hamas delegation arrived Friday morning in Tehran for an official visit. The delegation includes, among others, senior Hamas figure Izzat al-Rishq and head of the Hamas administration Saleh al-Arouri, who was forced to leave Qatar for Lebanon, reportedly due to “external pressures” following several Arab countries’ boycott of Qatar.

The official reason for the Hamas delegation’s arrival is the inauguration ceremony of Iranian President Hassan Rouhani, who was reelected in May. However, it is reasonable to assume that the delegation’s members will use the visit for additional meetings related to ties between Hamas and Iran.

Al-Arouri during his in meeting in Beirut, Lebanon, this week

Relations between Iran and Hamas have been known many ups and downs in recent years as a result of Hamas turning its back on the regime of Syrian President Bashar al-Assad, who is an ally of Iran’s, and following former Hamas leader Khaled Mashal’s rapprochement toward Saudi Arabia.

As Haman and Iran drifted further apart, Iranian aid to Hamas decreased significantly, though it was not stopped altogether. The improvement in the relations between the two was expected due to the change of leadership in the last internal elections held by Hamas, when the pro-Iranian bloc—led by Hamas leader Yahya Sinwar, Salah al-Arouri and others—gained strength. Hamas expects that Iran’s financial and military assistance will improve during the current term of the organization’s leadership.

Earlier this week, al-Arouri reportedly met in Beirut with former Iranian deputy foreign minister for Arab and African affairs Hossein Amir-Abdollahian. The Iranian official stressed that an important part of regional security and the fight against terrorism is linked to the strengthening and unity of the axis of resistance. He added that Tehran supports Hezbollah, Hamas and Islamic Jihad in the shadow of the unity of the Muslims and the fighting against the Zionist entity. He also said that the efforts of some Arab countries to normalize relations with Israel would not succeed.