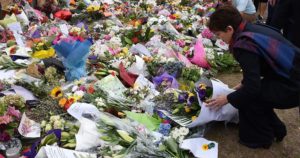 Ahmed Bhamji, chairman of the Mt Roskill Masjid E Umar, gave a speech questioning where the gunman got his funding from.

He said he suspected it came from “Mossad” and “Zionist business”, according to Newshub.

“I really want to say one thing today. Do you think this guy was alone…I want to ask you – where did he get the funding from?” he can be heard saying in video footage.

“I stand here and I say I have a very very strong suspicion that there’s some group behind him and I am not afraid to say I feel Mossad is behind this,” continued Bhamji.

A video of the speech was posted to Twitter, causing outrage in the Jewish community.

“Conspiracy theories – particularly the idea that Jews (whether through the Jewish state or otherwise) are a malevolent controlling force in the world – are at the very core of anti-Semitism,” she added.

Newshub spoke to Love Aotearoa Hate Racism co-founder Joe Carolan, who said Bhamji was one speaker out of 30 and there were many different points of view at the event.

Asked whether he agreed with or believed the theory that Mossad were behind the attack, Carolan told Newshub “absolutely not”.

Newshub contacted Bhamji, who accused the website of singling him out and said, “I made a statement, a lot of other people made statements.”

“Mossad is up to all these things,” he said. “When I talk about Mossad, why should the Jews be upset about it? Give me an answer?”

50 Muslim worshipers were killed and at least others were 20 injured in the shootings at the Al Noor and Linwood mosques in Christchurch on March 15.

For the first time in history synagogues in NZ are closed on Shabbat following the shocking massacre of Muslims in Christchurch. The Jewish Agency and the NZ Jewish Council stand in solidarity with the bereaved families. We are united in fighting violent hatred and racism.

After the attack, a Qatari sociologist posted two videos on his popular YouTube channel in which he claimed that the Jews instigated the massacre against Muslims in New Zealand in order to create discord between the Muslims and the Christians.

Immediately after the attack, Jewish groups from New Zealand and beyond expressed their horror over the massacres at the mosques in Christchurch.

People gather at a vigil to mourn for the victims of the Christchurch mosque attack in New Zealand at Washington Square Park, New York City. – Photo: RASHID UMAR ABBASI/REUTERS

The New Zealand Jewish Council said it is “sickened and devastated” by the attacks.

“We offer our full assistance and support to the Muslim community and stand united with it against the scourge of terrorism and racism, which we must do all we can to banish from New Zealand,” Stephen Goodman, the president of The New Zealand Jewish Council told the Jewish Telegraphic Agency.

“I extend my deepest condolences to the family and loved ones of the victims, and to the people of New Zealand. We must redouble efforts to combat hatred and division in our societies, from wherever it emanates,” he wrote in a statement.