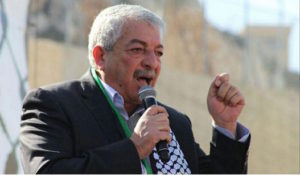 Palestinian Authority’s Vice Chairman threatens to terminate security coordination with the IDF and retract its recognition of the State of Israel, if Jerusalem’s freeze on Palestinian terror payments continues.

Israel’s cabinet in February approved the implementation of the freeze on funds to the Palestinian Authority. The law, which passed in July 2018 with a majority of 87 Knesset members, offset 502,697,000 shekels ($138,426,818) from funds transferred from Israel to the PA.

Last month, PA employees received 50% of their salaries, while terrorists and their families continued to receive their salaries as usual.

“The leadership plans to retract recognition of Israel and cease coordination on security matters with the occupation’s forces,” Aloul told the Shehab news agency.

Aloul also blamed the US for the situation, saying that “the American government decided to escalate matters in the area after transferring its Embassy to Jerusalem, and it actively encourages the Israeli settlement enterprise. Right now, Israel is planning to annex parts of the West Bank.”

“Due to these events, the status quo we relied on for our relationship may disappear soon. The leadership is expected to announce that we will not accept the situation continuing as it is, and we will soon announce drastic measures.”

Aloul also said that the leaders of Arab countries, including Turkey, are planning the next steps together with Abbas.

Abbas, he said, plans to meet the leaders of Muslim and African countries in order to garner support for his next steps.