A new documentary by New Yorker Jeff Lieberman called Re-Emerging: The Jews of Nigeria is taking an in depth look into one of the most unique ‘Jewish’ communities in the world: The Igbos of Nigeria.

Lieberman’s film is a rare testimonial to the daily life of a group that for years has been living off the official Jewish radar and in a political atmosphere of massacres between Christians and Muslims with the constant threat of destruction over their heads.

Trailer – Re-Emerging: The Jews of Nigeria

Vibrant and joyous it celebrates what it sees as its Jewish roots. Make no mistake, this is Africa, but Africa Jewish style.

So how did Jews get to Africa? And why has no one heard of this community until now? That question has a simple enough answer: The group is part of one of the largest ethnic tribes in Nigeria; the Igbo. A tribe with millions of people and the Jewish community making up only a small fraction of that number.

Lieberman explains that the unique situation of the community in Nigeria is a direct result of local history. The Igbo were influenced by traditions brought in by the missionaries who came to the region in the time of British colonialism.

The similarities between what the missionaries brought with them and the ancient tribal traditions led to mass-conversion to Christianity. The fact that Christians also offered a life of economic security helped.

The Igbo were always called ‘Nigeria’s Jews’, they have the Jewish mentality, they’re smart, and they work hard. That also turned them into a murder target, Lieberman added. 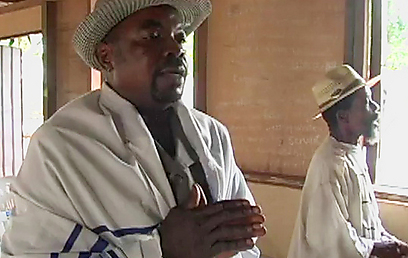 Prayer services at the local synagogue

According to Lieberman, within this huge tribe, lives a community that still defines itself as Jewish in every way. In fact, Lieberman said that should they be offered the opportunity to convert to Judaism they would be offended. In their eyes, they are as Jewish as any other Jew.

And while the ancient traditions are now all but extinct, there is still a group within the Igbo who believed that they were part of a different story, one they could not define. Everybody there has a history passed down from father to son, that they came from Israel and that they belonged to the “ancient Hebrews.”

When the internet came into the picture, some of the people there tried to use it to understand what it means to be Jewish. Their location and inaccessibility to the outside world did not allow them to learn about Jews and Judaism before the internet age.

One photo started it all

They existed in a kind of bubble, says Lieberman, and one of them, a young man named Samuel, who is in the movie, learned about prayer and the Jewish lifestyle from the internet and then taught everyone else.

The project started when Lieberman who was living in Los Angeles at the time, attended a lecture at a synagogue. The speaker was a conservative rabbi who had recently returned from Uganda and Nigeria, and as he showed photographs Lieberman became captivated.

Yet it was one specific photograph that set the journey into motion: “It was a small building in the middle of a wooded area. You wouldn’t notice right away, but there was a large Star of David on the building – that picture was completely wild.”

Lieberman, who at the time was looking for a subject for his documentary project, felt that this was what he had been waiting for. He told the rabbi that should he decide to return to Africa, Lieberman was coming with him with his camera.

At first, the rabbi didn’t take him seriously; Lieberman had never before been to Africa or even filmed a movie independently. But after a great deal of nagging, he agreed.

Meanwhile, in Africa the 2,000 Igbo community members used the information from the internet to begin living the Jewish way of life: Keeping kosher, observing the Shabbat, prayer and even ritual immersion in a nearby river. 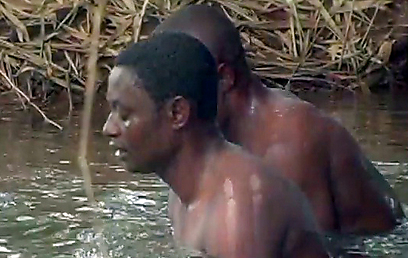 The tribe’s commitment to being part of the Jewish nation is evident in every frame in the film, yet with that commitment comes a heavy price. Some of the community members were ostracized by their Christian families and in many cases, the situation gets violent.

Living the Jewish lifestyle in Nigeria is in many ways a death wish. In Nigeria, which for years has been tottering between the Christian west and the Muslim north, massacres are part of the daily routine.

Lieberman says that the presence of active terror cells is a known fact but al-Qaeda and its local extensions have yet to realize the Jewish community growing right under their noses. Yet when it is discovered, fears of a targeted massacre could become a reality.

Lieberman notes that this constant threat did make him constantly reconsider whether the film was a good idea as the last thing he wanted to do, he says, was endanger these people in any way.

Yet he added that the community felt that it was more important that their story be heard, that the Jewish world recognize them and their way of life and that should anything happen to them Israel, or global Jewish communities would come to their defense. They are unwilling to give up their right to legitimacy and exposure said Lieberman.

As for their attitude towards Israel, Lieberman believes that is a very complex question. He said that at first he thought that the Igbos were using their newfound Jewish roots to get a better life in Israel but the reality is completely different.

Their way of life, he says, is not an excuse to leave Nigeria. There are those who wish to visit Israel and see where their forefathers came from but for the most part, that is all.

Lieberman adds that from what he understood from the community, Israel rejected their request for citizenship. Now, they have no aspirations to make aliyah, they are considered to be a relatively well off group. What they want is a connection, recognition.

Reactions to the movie throughout the Jewish world were mixed, notes Lieberman. He said that on the one hand, he had received a lot of positive feedback with many synagogues throughout the US looking to screen the film. Proof, he believes, that there are communities open enough to learn about another kind of Jew.

On the other hand, there were a large number of people who completely rejected the idea and who are very suspicious towards the Igbo.

Lieberman feels that the movie was a powerful experience. He said that the Igbo welcomed him with open arms and made him feel completely at home. He believes that the documentary’s message is that Jewish variety should be celebrated.

It is possible that Abraham and Sara were black, we don’t know their color but they were certainly not white or blond. If you ask a Nigerian Jew what color Abraham was he will answer black naturally, Lieberman added.