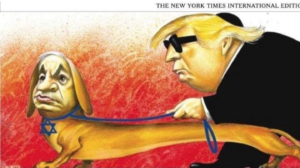 The International edition of the New York Times admits their caricature had antisemitic tropes and admits it was an ‘error of judgement’ to publish it. (… ya think?)

The New York Times International Edition ran a cartoon of an apparently blind US President Donald Trump wearing a yarmulke being led by a dog with a Star of David for a collar and with a face of Prime Minister Benjamin Netanyahu on April 25.

The cartoon was part of its Opinion section and appeared next to a column by Thomas Friedman about immigration.

The cartoon was condemned by numerous people over the weekend. It appeared on the April 25 edition but in Israel was available with the end of the Passover holiday, coinciding with the holiday and Shabbat, two days when many observant Jews were not active online.

“Another disgusting display of vile anti-Semitic trope celebrated in the NY Times World. The NY Times is signaling to the world that antisemitism is real, here and welcome,” wrote philanthropist Adam Milstein.

Imam Mohamad Tawhidi condemned it on social media, saying it was reminiscent of anti-Semitic Islamist texts comparing Jews and dogs. Others noted that while it had appeared online, it had been removed by Saturday afternoon. The New York Times Opinion twitter account included an editor’s note that said the cartoon “included anti-semitic tropes.”

The Times admitted that the image was “offensive, and it was an error of judgement to publish it.” They said they had since deleted it online.

An Editors’ Note to appear in Monday’s international edition. pic.twitter.com/1rl2vXoTB3