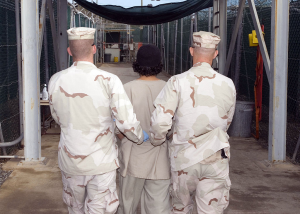 The man in question, Mohammed Abdul Malik Bajabu, 43, is linked to a car-bombing of an Israeli hotel in Mombasa, Kenya, as well as a plot to shoot down an Israeli Arkia airliner flying from Mombassa to Israel carrying 271 passengers in 2002. The car-bombing of the Israeli-owned Paradise Hotel killed 13 people, mostly Kenyans.

The attacks occurred on the same day.

A “forever prisoner” is a prisoner sitting in indefinite administrative detention in the Guantanamo Bay detention facility.

The Miami Herald reports that Abdul Malik was incarcerated in Guantanamo in 2007 and was interrogated by the FBI.

Israel is willing to take the prisoner, but negotiations on his transfer to the Jewish state were suspended when the FBI refused to hand over information it had obtained about the prisoner during its interrogations.

A US government official speaking to the Miami Herald was quoted as saying “The government of Israel has repeatedly asked for information to support their possible prosecution. But, for reasons that are unclear, the FBI has declined to provide the information that has been requested by senior Israeli prosecutors,”

“(The Israelis) want to see the incriminating statements. And that’s where we are stuck — and have been for many months —which is frustrating,” the official continued.

Negotiations over the proposed transfer of the inmate were conducted by the State Department’s Special Envoy for the closure of Guantanamo, Ambassador Lee Wolosky.

When asked by Miami Herald reporters about the incident, FBI Spokesman Andy Ames said “we have no comment on our communications with foreign governments.”

The Israeli Embassy to the US also declined to comment.