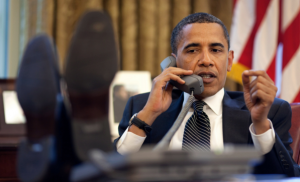 The meeting’s purpose was to critique how Israel fought Operation Protective Edge, and find how to make the next war better.

Netanyahu related, “I explained to President Obama that if they continue with these ceasefires, we will have no choice but to send in ground forces.

“He told me, ‘I am asking you not to send in ground forces.’ And I said, ‘I will do my best not to send them in, but if this continues, and the tunnel threat continues to threaten us, we will have no choice but to go in.’

“We tried our best to avoid a war in the south. We are facing a very cruel and difficult enemy.

“We wanted to destroy Hamas’ infrastructure in Judea and Samaria. This creates instability in Gaza, and Hamas prepared plans to deal with it.

“My goal was to avoid war as much as possible. If we needed to go to war, we wanted to pay the minimum price required. And when I say ‘price,’ I mean every family’s individual price. I know the pain of war. We have an obligation to ensure the price of war is as low as possible.”