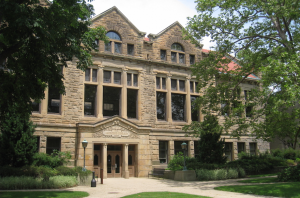 The Ohio college’s board of trustees announced Tuesday that it had voted to dismiss Joy Karega “for failing to meet the academic standards that Oberlin requires of its faculty and failing to demonstrate intellectual honesty.” The dismissal was effective as of Tuesday.

Karega, an assistant professor of rhetoric and composition, has been on paid leave and not teaching any classes at the college, located about 35 miles southwest of Cleveland, since August.

The vote to dismiss came “after extensive consideration and a comprehensive review of recommendations from multiple faculty committees and Oberlin President Marvin Krislov,” the board said in a statement sent to students, faculty, alumni and others associated with the college.

The statement also said the board reaffirmed Oberlin’s “historic and ongoing commitment to academic freedom.”

In a Facebook post late Tuesday, Karega said she would fight the dismissal, saying the decision was “not a surprise. I’ve been dealing with the persecution, incompetent leadership, and discrimination from Oberlin College since March. No surprise here.”

She appeared to blame the college governors and administration of persecuting her because she is black.

“To my faculty colleagues who had a hand in this decision and to my faculty colleagues who have sat back and done NOTHING: When this precedent that is being set extends beyond mere harm to faculty of color, you will have NO right to complain or say anything,” she wrote. “You had a chance, and you either fought for my dismissal or sat silent, watching as the College discriminated against me and applied arbitrary and biased standards to me in ways that many of you KNOW were wrong and unfair.”

Karega’s social media posts, including one accusing Israel and “Rothschild-led bankers” of responsibility for downing a Malaysian airliner over Ukraine in 2014 and another suggesting that Israel was behind the attack on the Charlie Hebdo office in Paris, drew widespread attention after The Tower published an article about them in February.

The article came on the heels of a letter from Oberlin alumni expressing concern about the tolerance of anti-Semitism on campus, particularly within the anti-Israel Boycott, Divestment and Sanctions movement.

Karega has not apologized for her posts.

“Dr. Karega attacked her colleagues when they challenged inconsistencies in her description of the connection between her postings and her scholarship,” the statement said. “She disclaimed all responsibility for her misconduct. And she continues to blame Oberlin and its faculty committees for undertaking a shared governance review process.

“In the face of Dr. Karega’s repeated refusal to acknowledge and remedy her misconduct, her continued presence undermines the mission and values of Oberlin’s academic community. Thus, any sanction short of dismissal is insufficient and the Board of Trustees is compelled to take this most serious action.”

The post (screen shot posted above), along with most of her other public posts, were taken down this week. (Facebook via The Tower)