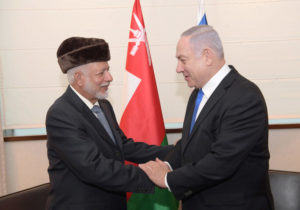 “This is an important and new vision for the future. People of the Middle East have suffered a lot because they are stuck to the past. This is a new era for the future and for prosperity for every nation,” the Omani Foreign Minister said during their meeting on Wednesday.

Netanyahu told him, “It’s a delight to see you again. The courageous decision of Sultan Qaboos [bin Said al Said] to invite me to Oman is changing the world,” Netanyahu said as he referenced his October visit to Oman.

“It’s pointing the way for many others to do what you said, not to be stuck in the past, but to seize the future.

“Many are following this lead, and may I say, including in this conference. I thank you for this positive policy that can lead to peace and prosperity for all,” Netanyahu added.

“I want to thank you on behalf of the people of Israel, and I allow myself to say on behalf of many people in the Middle East,” he said.

The Israeli Prime Minister is in Warsaw to attend the Ministerial to Promote a Future of Peace and Security in the Middle East, which opens on Wednesday night and extends into Thursday.

Both US Vice President Mike Pence and US Secretary of State Mike Pompeo are expected to address the ministerial meeting that includes representatives from the Arab world and the 28 nations that make up the European Union.

The main thrust of the meeting is unify US, European and Arab forces against Iran. But US envoys Jared Kushner and Jason Greenblatt are also expected to discuss the Trump Administration’s peace plan in Warsaw.

Netanyahu told Israeli reporters that he and the Omani Foreign Minister had spoken of steps the two countries, as well as others in the region, could do to advance mutual interests.

“From here I am going to a meeting with representatives of 60 countries [including foreign minsters] against Iran, not a secret meeting, but an open meeting with leading Arab countries that are sitting together with Israel to advance their joint interests against Iran,” Netanyahu said.

US envoy Jason Greenblatt, who is already in Warsaw tweeted in advance of the conference that, “Iran is the primary threat to the future of regional peace/security.

“That’s what Palestinian leaders don’t grasp; as a consequence of being detached from new realities, we see Palestinians increasingly left behind/more isolated than ever. Very unfortunate for the Palestinians,” he tweeted.

“Already we see historic cooperation in the region to deal with the civil wars in Syria and Yemen [and] malign activity by Iran [and] ISIS. By insisting that their case is the region’s sole and #1 priority, it impedes nations from countering the common enemy of Iran,” he wrote.