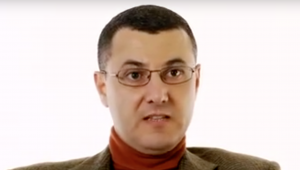 Barghouti was travelling from Israel, where he lives as a permanent resident with his wife, an Arab-Israeli citizen.

Airline staff at Israel’s Ben Gurion International Airport told Barghouti that US government officials had instructed their consulate in Tel Aviv to stop him from boarding the flight based on an “immigration matter,” according to a statement from the head of the Washington-based Arab American Institute, which had invited Barghouti to a number of events during his planned visit.

“Omar Barghouti is a leading Palestinian voice on human rights,” AII President James Zogby said. “Omar’s denial of entry into the U.S. is the latest example of the Trump Administration’s disregard for those rights. Having spent considerable time here as a student and while on speaking tours, Omar visiting America was never an issue before. It is clear this arbitrary political decision is motivated by this administration’s effort to silence Palestinian voices.”

The statement went on to say Barghouti’s travel is regularly restricted by Israel, but not by the US.

He was scheduled to speak in several US cities, including at a bookstore in Philadelphia owned by Marc Lemont Hill, a contributor who was fired from CNN for calling for a “free Palestine from the river to the sea,” during a speech at the United Nations.

In February, the US Senate passed a law that included a measure making it illegal for state contractors to participate in the BDS movement. While several states already had similar laws in place, this marked the first anti-BDS legislation on a national level.

In 2017, Israel passed a law banning the entry of supporters of BDS, which advocates for isolating Israel over its treatment of Palestinians and is inspired by international advocacy against apartheid-era South Africa.

The “Entry into Israel Law,” spearheaded by Interior Minister Aryeh Deri, authorizes his ministry to deny visas to non-Israeli citizens who are believed to have been involved in BDS activities.

The Israeli government not only views the movement as anti-Semitic for singling out the world’s only Jewish nation but also accuses it of seeking to harm its citizens.

In January 2018, Israel’s Ministry of Strategic Affairs published a “BDS Blacklist,” which together with the Ministry of Interior decided that entry to Israel would not be permitted to individuals associated with the listed organizations.

Commenting on the list, Public Security Minister said the Israeli government had “moved from defense to attack” when it came to BDS, telling organizations that support a boycott of Israel that the state will “act against them and will not allow them to enter its territory in order to harm its citizens.”

In 2017, Barghouti was arrested by Israeli authorities on suspicion of tax evasion. His permanent residency status was under review in 2016 based on concerns that he was based in the West Bank city of Ramallah and using his residency status to fly around the world promoting an anti-Israel movement.