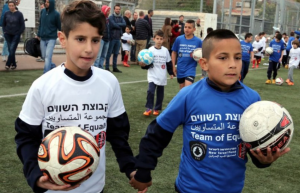 On the first day of the new school year, PM Netanyahu has an important message for both Jewish & Arab children, ‘First of all, study the Bible….We are meant to live together.’

Much to the delight of parents, the new school year has begun in Israel, and Prime Minister Benjamin Netanyahu had two related messages for students: study the Bible and seek peaceful coexistence.

Earlier this week, Netanyahu told his cabinet that he wants to “carry out an education revolution based on two things: excellence and Zionism.”

Central to achieve that is the study of the Bible, the prime minister insisted.

“First of all, the study of the Bible,” Netanyahu told his ministers. “This is the basis for why we are here, why we have returned here, why we stay here.”

While that message may have been primarily geared toward Jewish students, Netanyahu on Thursday helped kick off the new school year by visiting a school in the northern Arab city of Tamra.

“I want you all to learn about the history of the Jewish people as well as of the Arab communities and learn the truth. We are meant to live together,” he told the students.