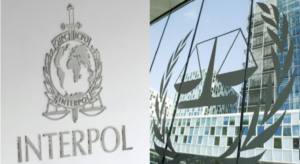 Following last month’s acceptance of the “The State of Palestine” as a member of Interpol, a new question has come to the fore: What is the greatest legal threat now to Israel? Interpol or the International Criminal Court? Both institutions have the potential authority to issue international arrest warrants against Israelis for alleged war crimes.

At first glance, it seems that Interpol is a greater threat. The International Police Organization has fewer requirements and legal procedures to go through before issuing warrants, meaning that the process could be faster if the Palestinians wanted to try to attack Israel with legal means. Unlike the ICC, Interpol can issue an arrest warrant without a preliminary or full criminal investigation.

With that said, the legal establishment in Israel is not overly concerned with Interpol, mainly because the organization cannot, in all cases, bind its member states to act on arrest warrants the way members of the ICC are legally obligated. Interpol, for example, has a clause which can exempt member states from issuing arrests which are “political” and violate “neutrality.” More specifically, Interpol’s website explains: “Our Constitution prohibits ‘any intervention or activities of a political, military, religious or racial character.’”

The ICC, however, is different and potentially poses a great risk. Here’s why: In 2015, after the Palestinians succeeded in joining the ICC, Prosecutor Fatou Bensouda decided to open a preliminary examination of the settlement enterprise and into alleged IDF war crimes committed during the 2014 Gaza War, also known as Operation Protective Edge.

Since then, Israel has carefully been monitoring the situation, worried that Bensouda would move her preliminary probe into a full criminal investigation that would then lead to arrest warrants against top Israeli officials. However, in February 2016, Bensouda told The Jerusalem Post that it might take her several years to make a decision. The ICC prosecution later visited Israel in October 2016, and, since then, there has been little sign of activity. Nevertheless, and while the ICC probe seems to be dragging on, its slow progress should not be mistaken for hinting that Israel is off the hook.

When Bensouda told The Post that her probe would take time, there were indications that she would not give Israel a free pass and would demand a stricter approach than Israel has taken in its investigations of some of the Gaza War allegations.

While the IDF got off to a quick start probing alleged war crimes, three years later, there are still three outstanding cases which await the Military Advocate General’s decision on  whether to close them or open a criminal investigation.

Granted, complex incidents like these are difficult to clarify, but the IDF has not released an update about the status of its probes into the incidents in Rafah, Shuja’iyya and Khuza’a since the initial review was opened after the war.

The ICC is not authorized to open investigations when it feels that the country under review has an independent and strong legal system and has sufficiently probed itself. The fact that three cases are still outstanding could have serious ramifications, since it will be difficult for Israel to defend itself without proving progress on these cases.

The IDF did not provide an estimated time frame for when these cases would be resolved, but it did issue the following response to The Post’s queries: “The IDF sees great importance in the examination of allegations of violations of the Law of Armed Conflicts or other misconduct by IDF forces during hostilities. Starting while the 2014 Gaza Conflict was still ongoing, and continuously since, the IDF Military Advocate General’s Corps has reviewed allegations and other reports regarding hundreds of incidents which allegedly took place during the conflict. The Military Advocate General (MAG) ordered criminal investigations into 30 of these incidents. Most of these investigations have been completed, and most of which have been reviewed and decided upon by the MAG. The findings of the remaining completed investigations are in different stages of review. With regard to many other alleged incidents, it was found that there were no grounds for a criminal investigation.”

“Additional incidents are still under review by the MAG Corps. The IDF dedicates substantial resources to the examination and investigation of the allegations and reports received regarding the 2014 Gaza Conflict. Naturally, examining and investigating alleged incidents which occurred during intensive and protracted hostilities, in areas not under IDF control, and which involve Gaza Strip residents under Hamas control, is a complex and time-consuming process.”