Or Asraf, Israel’s only fatality in Nepal, has been found by searchers

Asraf is the sole fatality of the 250 Israelis that were unaccounted for in Nepal, immediately after the earthquake that has killed more than 7,000 so far.

A search team in Nepal discovered Sunday the body of 22-year-old Israeli trekker Or Asraf who had been missing since last Saturday when a 7.9 magnitude earthquake devastated the Himalayan country. 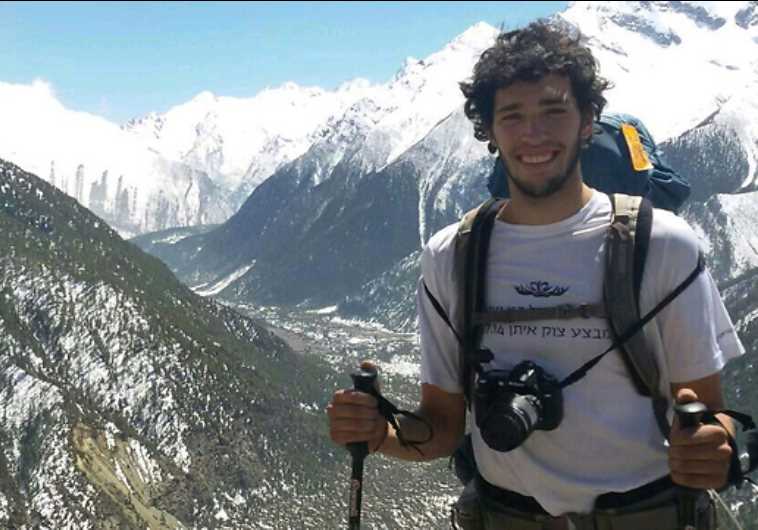 Asraf was the only Israeli to lose his life in the quake which has killed more than 7,000 people. His family confirmed on Sunday that they had been officially notified of his death.

The discovery of Asraf’s body came after travel documents belonging to him were found earlier Sunday near where he had last been seen in the Langtang area of Nepal just one hour before the earthquake struck.

The IDF, together with the Nepalese Army, ZAKA and Hatzalah, had combed the area for the last three days, based on information they received from trekkers who were in the area at the time, some of whom saw Asraf prior to the quake.

Members of the elite Egoz reconnaissance unit of Asraf’s Golani Brigade and his father, Patrick, were also in Nepal helping with the search.

“We are hoping for good news,” Patrick told the Israeli media over the weekend. He added, “I am not leaving here until we find him and bring him home.”

All other Israelis who were stranded in remote areas of Nepal have been rescued; in many cases, they could only be reached by helicopter.

Israel was able to rent helicopters from India and China, and the Nepalese Army made some helicopters available. Private insurance companies such as Harel and Phoenix were involved in the rescue efforts.

Immediately after the earthquake, 250 Israelis were unaccounted for in Nepal, but all except for Asraf were located alive. The last of the stranded Israeli trekkers, some 70 in number, were pulled to safety on Thursday and Friday.

It was only on Saturday that Israel officially listed Asraf as “missing.”

On Sunday, the overall death toll from the earthquake rose to over 7,000 as rescuers continue to search for the survivors and pull bodies from the rubble. Israeli rescue teams as well as delegations from other countries have been helping the Nepalese in their massive rescue efforts.

A Nepalese home ministry official said police and army rescued three people from the rubble in the district of Sindhupalchowk, northeast of the capital Kathmandu and one of the worst-hit areas in the country. No further details were immediately available.

In the northern Rasuwa district, a Nepali police team has pulled out the bodies of about 50 people, including some foreign trekkers, from the avalanche-hit area, officials said.

The entire village of Langtang was wiped out by the avalanche, said Ganga Sagar Pant, the head of the Trekking Agencies Association of Nepal, who has a representative in the area.

“All that is left is scattered belongings like bags and coats, all the houses have been thrown down the mountain,” he said. “There is nothing left. I don’t think anyone can survive that.”

The village is on a popular trekking route and has 55 guesthouses catering to visitors. It was not clear how many people were there at the time of the avalanche and whether they were foreigners or local villagers.

None of the recovered bodies has been identified, said Pravin Pokharel, deputy superintendent of police in the northern district of Rasuwa. Pokharel, who led the police team, said the bodies were pulled out from under snow and ice on Saturday. Rescuers were to return to the remote area on Sunday.

At least 200 other people are still missing in Langtang, including villagers and trekkers, said Uddhav Bhattarai, the senior-most bureaucrat in the district.

“We had not been able to reach the area earlier because of rains and cloudy weather,” he said by telephone.

Tulsi Prasad Gautam, the head of Nepal’s tourism department, said: “The death toll (of foreigners in Nepal) will go higher because in the Langtang area a significant number are still missing.”

US military aircraft and personnel were due to arrive in Nepal on Sunday, a day later than expected, to help ferry relief supplies to stricken areas outside the capital Kathmandu, a US Marines spokeswoman said.

Marine Brigadier General Paul Kennedy has said the delayed US contingent included at least 100 US soldiers, lifting equipment and six military aircraft, two of them helicopters.

The team arrives as criticism mounted over a pile-up of relief supplies at Kathmandu airport, the only international gateway to the Himalayan nation, because of customs inspections.

United Nations Resident Representative Jamie McGoldrick said the government must loosen its normal customs restrictions to deal with the increasing flow of relief pouring in from abroad.

But the government, complaining it has received unneeded supplies such as tuna and mayonnaise, insisted its customs agents had to check all emergency shipments.

“They should not be using peacetime customs methodology,” the UN’s McGoldrick said. Instead, he argued, all relief material should get a blanket exemption from checks on arrival.

Kennedy also warned against bottlenecks at Kathmandu airport, saying: “What you don’t want to do is build up a mountain of supplies” that block space for planes or more supplies.

Nepal lifted import taxes on tarpaulins and tents on Friday but a home ministry spokesman, Laxmi Prasad Dhakal, said all goods coming in from overseas had to be inspected. “This is something we need to do,” he said.

Nepali government officials have said efforts to step up the pace of delivery of relief material to remote areas were also frustrated by a shortage of supply trucks and drivers, many of whom had returned to their villages to help their families.

Many Nepalis have been sleeping in the open since the quake, afraid of returning to their homes because of powerful aftershocks. Tents have been pitched in Kathmandu’s main sports stadium and on its golf course.

According to the United Nations, 600,000 houses have been destroyed or damaged.

The United Nations said 8 million of Nepal’s 28 million people were affected, with at least 2 million needing tents, water, food and medicines over the next three months.