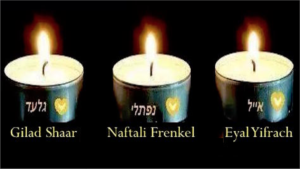 While in Israel, the public is holding memorial events marking the 5th anniversary of the kidnapping and brutal murder of three Jewish teenagers, Mahmoud Abbas has doubled the PA’s monthly ‘Pay to Slay’ payments to the mastermind behind the barbaric terror-attack.

Thursday marks five years since the arrest of Husam Al-Qawasmi, who planned the murder of Eyal Yifrach, (19), Gilad Shaar, (16), and Naftali Fraenkel, (16).

Al-Qawasmi was arrested on July 11, 2014 and subsequently convicted for planning the kidnapping and murder of the teens. Having now served five years in prison, as of today his salary is being doubled by the PA, jumping from 2,000 shekels/month to 4,000 shekels/month.

While the Israeli public holds memorial events marking the fifth anniversary of the abduction and murder of the three boys, the PA is doubling the salary of the mastermind behind the attack.

Maurice Hirsch, who heads Palestine Media Watch’s (PMW) Legal Strategies Division is the previous head of military prosecutions for Judea & Samaria (March 2013 – November 2016) and this was one of the most prominent events during his tenure. He personally dealt with the prosecution of the surviving terrorist Husam Al-Qawasmi.