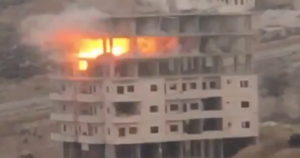 After nearly a day preparing to demolish most of this building with explosives, the Israeli occupying forces detonated the building of Mohammad Abu Teir around an hour ago. This is the ninth building to be demolished today in #SurBahir #Jerusalem pic.twitter.com/ULUvnRSi1B

The PA said it will request a special meeting of the United Nations Security Council to discuss the demolitions and lodge a complaint against Israel with the International Criminal Court (ICC).

“The Palestinian leadership will hold a series of important meetings in the next few days to take fateful decisions regarding our relations and agreements signed with Israel,” said PA Presidential spokesman Nabil Abu Rudaineh.

He pointed out that PA President Mahmoud Abbas had repeatedly warned that the Palestinians would not be able to continue their adherence to agreements with Israel as long as Israel insists on its non-commitment to these agreements.

PLO Secretary-General Saeb Erekat said in a press conference that the Palestinian leadership “is putting in place mechanisms to cancel all agreements signed between the PA and the Israeli side.”

Israeli security forces moved against the homes, arguing that they were too close to the security barrier. Palestinians worry that hundreds more such homes, could be in danger of demolition.

The razing of the structures set off a diplomat storm with the United Nations, European Union, France, Jordan and the Arab League all condemning the move.

IDF soldiers and border police entered the village of Sur Baher, where Wadi Hummus is located in the pre-dawn hours, ordering the some 17 residents living inside some of the 12 structures to leave.

The bulk of Sur Baher is located within the boundaries of the Jerusalem municipality, but the land on which the 12 structures were located is in the part of the Wadi Hummus neighborhood is located in Areas A and B of the West Bank, which is under full or partial PA control.

Photos and videos from the anti-occupation NGO All That’s Left, showed the border police surrounding and entering some of the buildings, many of which are under construction. The IDF and the Border Police blocked journalists from getting to the scene.

One Palestinian resident who sat on a plastic chair in his living room told the Border Police that he would rather they destroy the home on top of his head than take him out by force.

“I’m not leaving of my own free will,” said one Palestinian resident. “Take down the home on top of our heads, this is our life.”https://t.co/EI5JPcdyu9

“I’m not leaving of my own free will,” he said. “Take down the home on top of our heads; this is our life,” he added.

The homeowners received building permits from the Palestinian city of Bethlehem, which has municipal jurisdiction over that section of Wadi Hummus.

But the buildings are located on the Israeli side of the security barrier, which runs through the back of Sur Baher.

The structures in question are located within 400 meters of the security barrier. A 2011 edict prohibits construction within such a short distance of the barrier. Construction began on the buildings after 2014.

Wadi Hummus residents say they did not know of the edict when they began building. The buildings in question are interspersed among other preexisting buildings in Wadi Hummus that were built prior to 2011. Those buildings are also less than 400 meters from the barrier.

The High Court of Justice in June rejected an appeal by Wadi Hummus residents to halt the demolitions. The court is now in the midst of hearing a second appeal. On Sunday, it rejected a request for an injunction against the demolitions until such time as all the legal proceedings were completed.

The High Court of Justice had ruled that the structures could be demolished because they “constitute a security danger to the area of the security fence,” the Civil Administration said.

“Enforcement procedures were carried out in accordance with authority and procedures and subject to operational considerations,” it added.

The Jerusalem Municipality promised to advance within 180 days a new building plan for 55 dunams in Sur Baher that would include businesses with 1,500 new jobs.

The United Nations warned that Monday’s demolitions “contributes to the risk of forcible transfer” of Palestinians from the West Bank and east Jerusalem.

“The large-scale operation began in the early hours of this morning while it was still dark, forcing families out of their homes, and causing great distress among residents,” the United Nations said.

The UN said that its humanitarian partners were “poised to provide emergency response” to those who were displaced.

It rejected Israel’s security argument that the demolitions were necessary for security reasons, explaining that the International Court of Justice in 2004 found that the barrier in the West Bank was illegal.

“Had there been concrete action to ensure respect for these principles, and for international humanitarian and human rights law, generally, the people of Sur Bahir would not be experiencing the trauma they are today, and violations of their rights,” the UN said.

The European Union charged that Israel’s settlement policy undermines the viability of the two-state solution and the prospect for a lasting peace and seriously jeopardizes the possibility of Jerusalem serving as the future capital of both States,” the EU said.

The demolition came as US envoys Jason Greenblatt and Jared Kushner are set to visit the region to discuss US President Donald Trump’s upcoming peace plan, also know as the “Deal of the Century.”

Erekat said: “We tell those who complained about our position towards the Deal of the Century and the Bahrain [economic] workshop: The prosperity the world is witnessing in Sur Baher is what [US President Donald] Trump is talking about. Dozens of families have been evicted from their homes. This is the prosperity they promised us at the Bahrain workshop.”

Erekat was referring to the US-led economic conference that was held in June in Manama, Bahrain, under the banner “Prosperity to Peace.” At the conference, which was boycotted by the PA, the US administration unveiled the economic portion of its “Deal of the Century.”

Erekat also criticized Arab countries for reportedly normalizing their relations with Israel. “Arab normalization [with Israel] is a stab to the back of the Palestinian people,” he said. “What’s happening in Sur Baher is the price for this normalization.”

Abbas, he added, has issued instructions to financially compensate the families whose homes were demolished.

PA Prime Minister Mohammed Shtayyeh said during the weekly meeting of his cabinet that the demolitions in Wadi al-Hummus were in violation of international and humanitarian laws. He said that most of the buildings that were demolished on Monday were located in Area A and Area B of the West Bank.

Shtayyeh said that the demolitions cancel the divisions of the West Bank. “We will no longer deal with these Israeli divisions of our Palestinian lands,” he said.

The Fatah Central Committee accused Israel of committing “war crimes and ethnic cleansing” against Palestinians. “This crime comes amid absolute American support for Israeli settlement enterprises,” the committee charged. “It is a natural outcome of the illegal American decision to recognize Jerusalem as the capital of the occupation state and move its embassy [from Tel Aviv] to Jerusalem.”

Hamas spokesman Hazem Qassem said in a statement that the Israeli “crimes won’t stop the Palestinian resistance against the Zionist settler enterprise.”

Islamic Jihad official Khader Habib said that the “latest Israeli crime was part of an attempt to overcome the Palestinian demographic factor.” He appealed to all Arabs and Muslims to support the Palestinians and work to “thwart the occupation schemes.”