Pakistani Jew seeks Passport to allow him passage to Israel 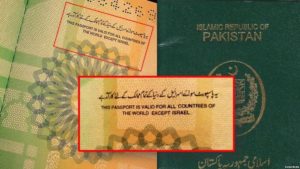 Fishel Khalid, a Pakistani Jew, appeals to his government in an op-ed asking for valid passport to travel to Jerusalem, since Pakistani passports are restricted: “Valid for all countries except Israel.”
• In Khalid’s op-ed, he points out how travel ban to Israel violates his religious rights afforded in the Pakistani constitution.

Fishel Khalid, a Pakistani Jew, is asking his government to allow him to travel to Israel

A Jewish man in Pakistan has appealed directly to local authorities to allow him to travel to Israel.

On Saturday, Fishel Khalid, who also goes by the name “Fishel Benkhald,” tweeted his request at senior government officials, along with images of his Pakistani passport showing his religion listed as Judaism and the specification that “this passport is valid for all countries of the world except Israel.”

Khalid has said he wants to travel to Jerusalem for the Passover holiday in April.

Some on social media suggested alternate ways for Khalid to travel to Israel, but the Pakistani Jewish activist has insisted on obtaining an Israeli visa for his Pakistani passport.

In an op-ed in Islamabad’s Daily Times [op-ed link may not open in certain countries – I&S] last month, Khalid argued that Pakistan’s ban on travel to Israel was a violation of the religious rights afforded to citizens by the country’s constitution.

He noted that Muslims, Christians and Jews in Pakistan were unable to exercise their right to make religious pilgrimages as a result of the ban on travel to Israel.