Palestinian charged with attempting to smuggle diving equipment to Hamas 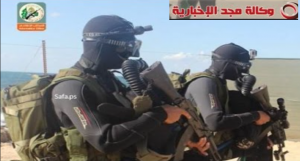 Three months ago the Kerem Shalom checkpoint security guards managed to foil the large smuggling attempt. During the examination they found tens of professional diving suits which were slated to enter the Gaza strip. According to the charges the suits were meant for terrorist groups in the strip including the navy commando units of Hamas.

According to a Defense Ministry announcement, the diving suits were disguised as a regular consignment of sports clothes and equipment being imported into the PA from abroad.The consignment was confiscated and an investigation was opened to locate those responsible for the smuggling attempt.

Additionally, a month earlier, the GSS and checkpoint authorities foiled an attempt to smuggle a large quantity of materials for preparing weapons and building tunnels. In the consignment a number of pipes for use as mortars and tens of electrical motors for use in the underground infrastructure of Hamas in Gaza were uncovered.