Palestinian journalists plan strike follows incident where PA security officers beat a number of journalists at a rally in Ramallah on Friday.

Palestinian journalists plan to stage a sit-in strike in Ramallah on Sunday in protest against recurring assaults on them by Palestinian Authority security personnel. 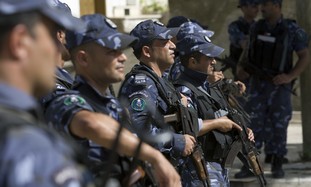 The Palestinian Journalists Syndicate in the West Bank called on its members to participate in the protest and condemned the attacks as an assault on freedom of expression.

The syndicate called on the PA leadership to punish security officers and policemen who assault journalists.

The latest protest follows an incident during which PA security officers beat a number of journalists during a rally in Ramallah last Friday in support of deposed Egyptian president Mohamed Morsi.

The journalists complained that the officers also confiscated their cameras and deleted footage of the rally.

The assaults came as anti-riot policemen used force to break up the rally, which the PA said was organized by Hamas.

Among the journalists who were beaten were Ahmed Milhem of Wattan TV and Mohamed Arouri of the Hamas-affiliated Al-Quds TV.

Arouri said a number of security officers dragged him, beat him and told him that he was “unwanted” in the area for security reasons.

A third journalist, Mohamed al-Qiq, was roughed up by at least 15 officers belonging to the Preventive Security Force, witnesses said.

“Violations against the freedom of expression by the Palestinian security forces were moving from bad to worse,” the Palestinian Center for Development and Media Freedoms said.

“Suppression of marches is a policy of the security forces and leads to assaults on journalists,” the center said.

Failure to hold those responsible encourages assaults on journalists and freedoms of expression, it added.

Meanwhile, Hamas accused the PA of arresting 10 of its supporters in the West Bank over the weekend.

Most of those arrested had participated in protests against the “military coup” in Egypt, Hamas said.