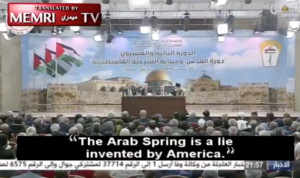 “Abbas’s body is drenched with antisemitism, from head to toe. He continues the tradition of his predecessors, the Grand Mufti who was a friend of Hitler, and Arafat, an arch-murderer of Jews,” said Bennett.

“He fills the minds of the next generation with the poison of antisemitism. Peace will come from the public, not from a corrupt and antisemitic Palestinian Authority,” he said.

In a speech at a meeting of the Palestinian National Council, Abbas alleged that European Jews were massacred for centuries because of their “social behavior related to usury and banks.”

“From the 11th century until the Holocaust that took place in Germany, the Jews – who moved to Western and Eastern Europe – were subjected to a massacre every 10 to 15 years. But why did this happen?” Abbas said on Monday, before interjecting, “The Jewish issue that was widespread in all European countries… was not because of their religion, but rather their social behavior related to usury and banks.”

“The antisemite is out of the bag. Mahmoud Abbas, a small and irrelevant man, has revealed in the last few days… what he truly thinks of the State of Israel and Jews. The man, who funds families of terrorists who massacred and are massacring us, will go down in history as a Holocaust denier, racist and inciter, if at all,” said Edelstein.

“The Holocaust-denying Mahmoud Abbas revealed in Arabic what he hides in English: that he is the head of those inciting against the existence of the Jewish State in the Land of Israel,” said Hotovely.

“Someone who continually claims that the Jewish State is a colonialist enterprise, spreads hatred and works to prevent peace in the Middle East can certainly not be a partner for peace, but instead a force that makes it more unattainable,” she said.

Writing on Twitter on Tuesday, US Ambassador to Israel David Friedman castigated Abbas’s speech as a “new low,” and said his remarks show that Israel is not responsible for the continued failure of American-led efforts to secure a final peace agreement between Israel and the Palestinians.

“President Abbas’ remarks yesterday in Ramallah at the opening of the Palestinian National Congress must be unconditionally condemned by all. They are very unfortunate, very distressing & terribly disheartening. Peace cannot be built on this kind of foundation,” Greenblatt wrote on Twitter.

Adam Rasgon and Samuel Thrope contributed to this article.