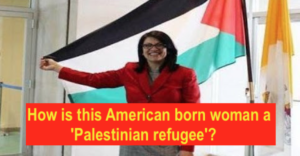 Then-chairman of the PLO in 1966 admitted their policy: Arab States will never absorb Palestinian refugees, and they will remain refugees, “If they try to leave. We [PLO] will stop them, by force if need be.”
– UNRWA has taken 10’s to 100’s of BILLION$ from the West for 70 years to maintain this refugee policy, growing their numbers exponentially to perpetrate the Arab conflict against the Jews.

The Arab states will not integrate the Palestine refugees because integration would be a slow process of liquidating the Palestine problem.

That has been the clear and unapologetic policy of the PLO until this day, even under its guise as the Palestinian Authority. As many have suspected for a very long time, the only reason that the so-called “Palestinian refugee crisis” exists at all has been to promote the bald-faced deception that makes Israel look responsible for the suffering of displaced persons.

Let it be known to all who have eyes to see that more than 50 years of Palestinian suffering, the ongoing wars and terrorism, and the billions of dollars spent to solve the Palestinian refugee problem have all come as a result of the PLO’s plot to defame Israel in the eyes of the world. How cruel.

“Consequently, the refugees don’t want to be integrated,” the PLO chairman continued. The then-PLO leader declared in simple English that because the Palestinians want to remain a thorn in the flesh of the Jewish nation, therefore there will never be a resolution to the refugee problem. The claim that given a chance the Palestinians would not accept citizenship in Jordan, Lebanon, Egypt or anywhere else is a lie.  Most Palestinians have always been eager to live a good life in any other country in which they are welcomed. Does anyone believe that they prefer to live in the squalor of refugee camps for more than 50 years?

At the end of the article, Hamdi Hizrallah, then a representative of the PLO, said: “I will tell you something. And I wish you would quote me. If they try to leave. We will stop them, by force if need be.”

Here [above] is proof beyond any doubt that the PLO created and continues to perpetuate the myth of the Palestinian people suffering because of Israeli policies. The truth is that the Palestinian leadership is driven more by hatred for the Jewish Nation than care for the lives of their own people, who they are purposely keeping in poverty and desperation for over half a century.

Muslim Congresswoman Rashida Tlaib is a Palestinian “refugee” by political design…. NOT by circumstance.

President Donald Trump was wise in ending all funding to UNRWA, the UN Palestinian organization that exempts ALL the world’s other refugees, since their status is temporary. Palestinian refugee status has been inherited now by the THIRD generation…. to Arabs born in Europe, Canada, the US or even Australia. To some who don’t speak Arabic or whose folks have never been to Israel!

Being granted ‘refugee’ status is but a tangent of the big lie.

President Trump is the very FIRST ‘Head of State’ to proclaim the truth on an international stage…and not simply parrot St. Dept. policies since the Carter administration… as all past world leaders have done.

For the truth to ‘catch on’ there needs to be momentum. Four years of ‘Trump & Co.’ isn’t enough. This is but another reason why #Jexit is so very important!