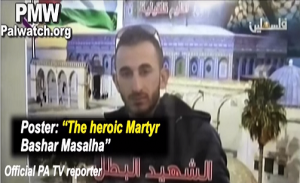 During the televised event, the PA TV news anchor praised Masalha as a “martyr” no fewer than 11 times.

What did Masalha do that the Palestinian leadership is so proud of him?

On March 8 of this year, he ran down the boardwalk in the ancient coastal town of Jaffa stabbing anyone and everyone who crossed his path. In the end, Masalha murdered just one person – American tourist Taylor Force – and wounded 11 more people, including an Israeli Arab who works for coexistence with Jews.

Masalha was eventually shot and killed by Israeli police, thus earning him a place of eternal praise among those parts of Palestinian society that want to see Israel wiped off the map.