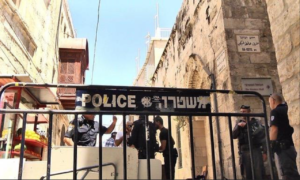 Palestinian sources said that the man, a resident of Bethlehem, had worked for the PA Ministry for Local Government.

“The 55-year-old man, who is a US citizen, is being interrogated by the Palestinians security agencies in Ramallah for his role in the sale of an Arab-owned house in the Old City of Jerusalem to a Jewish organization,” the sources told The Jerusalem Post.

They said the man was suspected of acting as a “solicitor” between the owner of the house and the Jewish organization that bought the house.

A senior PA security official in Ramallah refused to comment on the arrest of the US citizen.

The Post has obtained a copy of the man’s US passport, but due to the sensitivity of the case has chosen not to publish his name.

US government officials said they were aware of the arrest and expressed concern that he would be treated fairly. They said the State Department was in touch with the PA regarding the arrest.

Last week, the Palestinian Islamic religious authorities in east Jerusalem reaffirmed a fatwa (religious decree) prohibiting Palestinians from selling their houses and lands to Israelis. Some Palestinians have called for imposing the death penalty on those who violate the ban.

One source told the Post that the man was suspected of receiving $25,000 in commission for his role in the sale of the house, which belonged to a Palestinian widow from the Muslim Quarter in the Old City of Jerusalem.

The source said it was not clear at this stage whether the man was suspected of involvement in the recent sale of another house in the Muslim Quarter to Ateret Cohanim, a yeshiva group that has long been purchasing Arab houses and lands in the Old City and east Jerusalem neighborhoods.

In that event earlier this month, Jewish families moved into the Joudeh family house near the Temple Mount, triggering a wave of protests in east Jerusalem and among many Palestinians. The PA government recently announced that it has formed a commission of inquiry to investigate how the house was sold to a Jewish organization.

The Joudeh family has strongly denied selling their house to Ateret Cohanim. Members of the family said they sold the house to Khaled al-Atari, a businessman from east Jerusalem with close ties to the PA’s General Intelligence Force headed by Gen. Majed Faraj.

They said they originally sold the house to a Palestinian living in the US called Fadi Elsalameen, but canceled the contract after he failed to pay the agreed sum. Elsalameen is believed to be closely associated with deposed Fatah leader Mohammed Dahlan, an arch-enemy of PA President Mahmoud Abbas.

Elsalameen claims that the PA exerted pressure on the Joudeh family to cancel the transaction and sell the house instead to Atari. He has also accused Faraj and the PA General Intelligence Force of facilitating the sale of the house, which is located a few hundred meters away from the Temple Mount, to the Jewish organization.

The Joudeh family has published a copy of a document issued by the Justice Ministry’s Land Title Register Authority (Tabu), which shows that the ownership of the house was transferred to Atari on August 23, 2018.

On the same day, the ownership of the house was transferred to an overseas company called Daho Holdings Limited, according to the document.

Atari, the east Jerusalem businessman, has failed to provide a satisfactory explanation as to how the house ended up being registered under the name of a foreign company, which apparently acted as a front on behalf of the Jewish organization.

Last week, Palestinian activists in east Jerusalem summoned Atari and a representative of the Joudeh family for what some Palestinians described as a kangaroo court in an attempt to find out who sold the house to Ateret Cohanim. A video of the “court” hearing that was later posted on Facebook has gone viral, with many Palestinians calling for the “execution” of those involved in the transaction for “high treason.”

On Thursday, the Israel Police arrested three east Jerusalem residents on suspicion of incitement for their role in organizing the “court” hearing and threatening Atari. The three are: Abdullah Alqam, Fadi Mtur and Kamal Abu Kweider. The three were arrested hours before the second “court” session was scheduled to convene on Thursday evening.