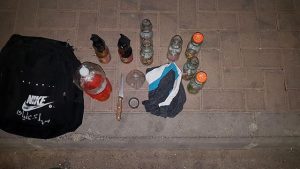 The two were caught at the beginning of last week after they were surveilled by a police force and by Border Police operating in the area, who noticed that they were carrying a school bag that looked abnormally heavy and full.

The teenagers were making their way to a school in the neighborhood, which also happens to be located near a police station.

When the force approached the boys they noticed that they smelt of gasoline. After seizing the backpack, the police found nine bottles of glass, two of which had already been prepared for use as Molotov cocktails, a plastic bottle containing fuel and a knife. In addition, the backpack also had an inscription in Arabic with the name of the terrorist Baha Aliyan, who carried out the attack on the bus in Talpiot in October 2015.

The two boys were arrested and brought for questioning at the Oz station where they admitted to the accusations levelled against them. The investigation revealed that the young men intended to throw the Molotov cocktails at the forces stationed on Meir Nakar Street.

The security personnel has been stationed there for a long time, leading to a significant decrease, according to the police, in the throwing of stones and Molotov cocktails toward the road bordering with Jabel Mukaber.

The youths’ detention was extended until Thursday, when the two boys are expected to be indicted.