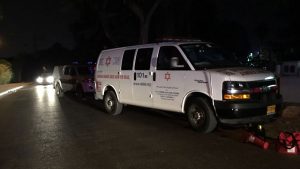 A terrorist infiltrated a house in the West Bank settlement of Halamish (Neve Tzuf) Friday evening and stabbed four people before being neutralized. Three of the victims died of their wounds, while a fourth is in serious condition.

The terrorist murdered a 70-year-old grandfather and his son and daughter, in their thirties, during a Shabbat dinner. The grandmother, aged 68, was badly wounded.

According to preliminary investigations, the terrorist, 19-year-old Omar al-Abed, from the nearby village of Kobar, entered the settlement at around 9:30pm, broke into the house and stabbed the four.

The attack took place when about 10 members of the family sat for a Shabbat dinner. When the terrorist burst into the house, the wife of the son who died hid the children in a room, and from there she called the police and screamed that there was a terrorist in the house who was stabbing the occupants.

A neighbor of the family—an IDF Oketz Unit soldier—heard their screams, rushed to the scene and shot the terrorist, moderately wounding him.

Before he left for the attack, the terrorist wrote on Facebook a post linking his attack to the riots around the Temple Mount and the tensions over the new security measures introduced at its entrances. “I have many dreams and I believe they will come true, I love life and I love to make others happy, but what is my life is when they (Israel) murder women and children and defile our al-Aqsa.”

Hamas issued a statement this evening welcoming the attack, which they called “heroic.” According to Hamas, the attack followed “Israel’s violation of the rights of our people in Jerusalem and the Al-Aqsa Mosque.”

Large IDF forces began searching the town and nearby areas to see if there were other terrorists, and they caught a suspicious unarmed Palestinian outside a settlement, and the IDF is still investigating whether he is somehow connected to the incident.