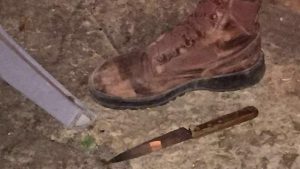 MDA paramedics treat a 33 yr-old man wounded in the Har Hevron community after a knife-yielding Arab terrorist breaks into his home, stabbing him.

An Israeli civilian was lightly wounded when an Arab terrorist broke into his home in the Har Hevron region and stabbed him.

Magen David Adom EMTs and paramedics reported that they were treating a 33 year old man for stab wounds to his limbs.

Senior MDA EMT Shmuel Koren said: “When we arrived at the scene we saw a fully conscious injured man walking around. We provided medical treatment and stopped his bleeding, while he was in light and stable condition.”

Preliminary reports indicate that the victim heard suspicious noises and left his house to investigate. When he encountered the terrorist, he ran back inside his house to retrieve his firearm. The terrorist then entered the house and attacked him, before being shot and killed by another family member in the house.

Residents in Har Hevron were asked to return to their homes as a search is conducted to determine that there are no other terrorists in the area.