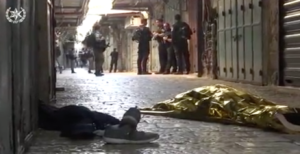 Stabbing Attack in the old city of JLM- @Il_police officers neutralized an attacker injuring two. They were taken to the hospital, with severe and mild injuries. Investigation into the identity of the attacker revealed that he is a 19-year-old resident of Judea and Samaria region pic.twitter.com/QegOYUvD0R

On Friday morning, a 19-year-old terrorist from the West Bank, who had allegedly come to the Temple Mount for Ramadan to pray, stabbed and critically wounded a 47-year-old man at Damascus Gate – which wasn’t captured in the video. Minutes later, while running through the Arab market, the terrorist stabbed the 16-year-old.

The teenager and his brother were walking through the Muslim Quarter’s Arab market while on their way back from praying at the Western Wall just before 6:30 a.m.

The video shows the terrorist running and then jumping at the 16-year-old who was slowly riding his bicycle as his brother walked next to him. As the injured teenager runs in one direction throwing of his jacket, the terrorist is then seen chasing after the other brother who begins running in the opposite direction.

As he continued to run up the stairs, the terrorist just behind him, border police arrived at the scene and shot the terrorist, neutralizing him.

Later scenes show the body of the terrorist covered by golden foil as Border Police stand nearby and police forensics units comb the scene for evidence.

The 16-year-old sustained a wound to his back and is in moderate-to-serious condition, whilst the 47-year-old victim sustained wounds to his chest, neck and head. He remains in stable but critical condition.