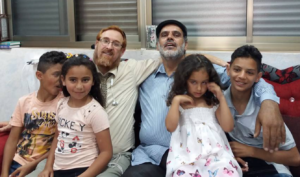 A senior PA official in Hebron on Monday confirmed Jaber’s arrest to The Jerusalem Post, but said he cannot discuss the details of his detainment. The PA Attorney General’s Office in Hebron declined to comment on the case.

On September 3, Jaber hosted Glick at his home in Hebron to celebrate Eid al-Adha, a major Muslim holiday. In pictures Glick shared on Facebook, Jaber and the member of Knesset are seen sitting around a table of sweets and fruits alongside Jaber’s family members.

“Happy Eid al-Adha my friend Muhammed Jaber in Hebron. God willing all of us will live here in peace,” Glick wrote in a post attached to the photos.

The PA has long criticized Glick for visiting the Temple Mount, a holy site for Jews and Muslims, referring to him as an “extremist” in its official media outlets.

Nabil Abu Rudeinah, PA President Mahmoud Abbas’s spokesman, recently described Glick’s visits to the Temple Mount as “provocations… that will lead to grave consequences.” Glick holds that Jews and Muslims should be able to access and pray freely on the Temple Mount.

On Monday, Glick told the Post that he went to Jaber’s home to wish him a happy holiday.

“I have known Muhammed since I became a member of Knesset,” Glick said. “We have met many times and we speak on the telephone every couple of weeks.”

Over the past year, Glick, a member of Prime Minister Benjamin Netanyahu’s Likud party, has organized a number of meetings between Jaber and groups of Israelis including settlers in Otniel and Kiryat Arba and young people in pre-army educational programs.

“He is truly a man of peace and coexistence,” the member of Knesset said. “His arrest shows that the Palestinian Authority is not interested in dialogue and normalization.”

Jaber told Channel 2 in July that he used to incite violence against Jews, but today wants to coexist with them.

During his interview with the Israeli television station, Jaber also spoke about how he planned to bomb an IDF base in Beer Sheva several years ago, but changed his mind after having a positive experience with a solider.

“A switch was turned in my brain,” Jaber said, talking about how his interaction with the soldier transformed his approach to life.

Glick also said he spoke to US Ambassador to Israel David Friedman and Coordinator of Government Activities in the Territories Maj. Gen. Yoav Mordechai to intervene with the PA in order to secure Jaber’s release.

Palestinian officials responsible for outreach to Israeli society declined to respond to Glick’s statements or comment for this report.