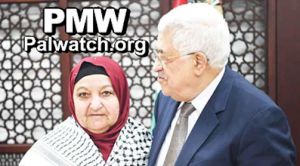 As Western nations work for gender equality in society, Mahmoud Abbas’ Palestinian Authority proudly noted on International Women’s Day, how it has always allowed women to be suicide-bombers and armed terrorists.

Not wanting to miss out on the gender equality movement that’s all the rage in most of the Western world these days, the Palestinian Authority has been talking up the prominent role of women in its society.

For instance, most Palestinian leaders have absolutely no problem with women joining men as equals in the merciless slaughter of Israeli Jews.

In fact, the most deadly Palestinian terrorist attack on Israelis ever was led by a women. In 1978, Dalal Mughrabi and her team of killers from current Palestinian leader Mahmoud Abbas’ Fatah party, hijacked a passenger bus on Israel’s coastal highway and executed 37 of the people aboard,[plus 1 on the beach] including 13 children.

Mughrabi has ever since been held aloft as a role model for Palestinian girls.

On International Women’s Day, which was marked earlier this month, the secretary-general of Abbas’ “moderate” Fatah party, Tayeb Abd Al-Rahim, highlighted Mughrabi as evidence of the gender equality in Palestinian society.

“From the outbreak of our revolution in 1965, the outlook of the Palestinian National Liberation Movement – Fatah – has been clear in its social aspect; it saw no difference between women and men, and Dalal Mughrabi who led men is testimony to this,” said Al-Rahim in remarks carried by the official Palestinian newspaper Al-Hayat Al-Jadida. [Translation by Palestinian Media Watch]

March 11 was the 40th anniversary of the Coastal Road Massacre, and the Palestinian Authority took that, too, as an opportunity to encourage young Arab girls to emulate the blood-soaked female terrorist.

At a local high school event, the Palestinian Authority’s Al-Yasser Cultural Forum announced that its agenda is to “return the glory to the fighting Palestinian girls and women such as Dalal Mughrabi and others who sacrificed their lives for Palestine [sic], and also to provide information and knowledge to these female students during recesses.”

The Palestinian Authority obligated itself in the various signed agreements with Israel to cease all incitement that could lead to violence against Israeli Jews. Ongoing violations of this stipulation are seen by Israel as the primary obstacle to peace.