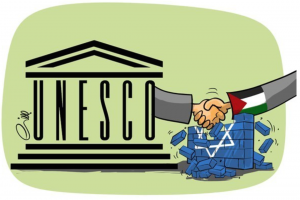 The proposal, likely to pass due to Muslim majority in the UNESCO Executive Council, will have Judaism’s Kotel (a.k.a. Western Wall or Wailing Wall in English) renamed Buraq Plaza, and incorporated as part of Islam’s Al-Aqsa Mosque compound.

In an attempt to gain international legitimacy for its rewriting of history, the Palestinian Authority (PA) will submit a resolution to UNESCO (UN Educational, Scientific and Cultural Organization) next week claiming the Kotel (Western Wall) as its own.

The proposal calls to have the Kotel in Jerusalem – which is an outer wall of the Temple Mount that is the holiest site in Judaism – recognized as part of Al-Aqsa Mosque located on the Mount, reports Yedioth Aharonoth on Friday.

The PA is not a member of the UNESCO Executive Council, and therefore the proposal will be submitted for a vote next week on its behalf by the six Arab member states of Algeria, Egypt, Kuwait, Morocco, Tunisia and the United Arab Emirates (UAE).

Senior Israeli sources revealed that the PA is working in parallel to have the proposal submitted at the UNESCO plenum, where the PA is recognized as a state.

In response, Israel is working behind the scenes to rally opposition to the proposal, although there is an automatic Muslim majority making its adoption all but certain.

A copy of the proposal reveals its main points, which begin with the call “to declare and confirm that the Western Wall is part of Al-Aqsa Mosque, and is called Buraq Plaza. The same applies to the Mughrabi Gate.”

Buraq Plaza refers to the “Al-Buraq” Wall, a name given by Muslims to the Kotel in the 1920s in an attempt to claim it. The name refers to Mohammed’s “winged steed” he supposedly rode to Jerusalem in his “night journey.”

The PA has long tried to revise history and claim the Kotel as the “Al-Buraq” Wall, most recently in a call by PA Grand Mufti Sheikh Mohammed Hussein this August.

“Condemn Israel – for everything”

The proposal continues, demanding that the world condemn Israel over calls to have its citizens carry firearms to defend themselves from the recent Arab terror wave, in an apparent reference to Jerusalem Mayor Nir Barkat’s recent comment.

It likewise calls for condemnation of IDF security actions in Jerusalem, “the occupied capital of Palestine,” and condemnation of Israel for excavations near the Temple Mount, where archaeologists have been forced to comb through rubble after Arabs demolish ancient Jewish artifacts on the Mount.

The proposal demands condemnation of “Israeli aggression and illegal measures taken against the freedom of worship and access of Muslim to al-Aqsa Mosque and Israel’s attempts to break the status quo since 1967.”

Despite the false claim that Israel has recently changed the status quo on the Mount, the Jordanian Waqf in fact continues to hold de facto control and bans Jewish prayer in spite of Israeli law stipulating freedom of worship.

Security forces have prevented Arab access to the Mount occasionally as a preventative measure, given frequent violent Arab riots that have seen the Al-Aqsa Mosque turned into a terror base from which rocks and explosives are hurled at police.

The proposal went on, calling for a condemnation of “attacks” against the Mosque by Jewish “extremists, and even condemning Israel for building a light rail into the eastern and northeastern part of its capital, in a move that was meant to ease transportation for Arab residents before they destroyed three rail stations last summer.

The Kotel isn’t the only Jewish site that the PA seeks to usurp in the proposal, which also calls to have the Cave of Machpelah in Hevron – where the Jewish patriarchs and matriarchs are buried other than Rachel – as well as Rachel’s Tomb in Bethlehem, declared “part of Palestine.”

Driving the attempt to claim Rachel’s Tomb is the recent Muslim revision according to which it is the grave of Bilal ibn Rabah, a companion of Mohammed, who was never in Israel.

Finally, the proposal condemns alleged Jewish violence meant to change the “character” of Hevron, the ancient Biblical city in Judea where the Jewish patriarchs and matriarchs lived.

“Palestinian lies are a world heritage”

In response to the bevy of calls in the proposal, Israeli Ambassador to UNESCO Carmel Shama Hacohen accused the PA of continuing the incitement to terror.

“The Palestinians continue to add fuel to the fire of incitement and ongoing terror,” Shama Hacohen said. “In my first speech to UNESCO last year I warned the world’s countries that false incitement by the Palestinians against Israel especially regarding the Temple Mount means playing with fire. At the last conference in Bonn, I suggested registering the Palestinian culture of lies as an intangible world heritage site.”

“The new proposal is tantamount to pouring fuel on the fire of incitement and ongoing terror instead of being responsible and calming the situation down,” noted the ambassador.

“Of course we must not despair or get alarmed, as they have lies whereas we have the ethical, realistic and historical truth, and it will triumph. The Jewish people and the Western Wall are one and the chances of the Palestinians to Islamize the Western Wall are the same as the chances of Islamizing the Jewish people. Even the morning after the vote the Israeli flag will fly over the wall.”

“We pay a high cost for our existence in our country, but there is no responsible partner able to reduce this cost in the near future, because apart from the question of their right to a state in our country, their conduct raises a critical question regarding their ability to act as a responsible country, and this is the saddest conclusion from the Palestinian’s conduct at UNESCO,” she concluded.