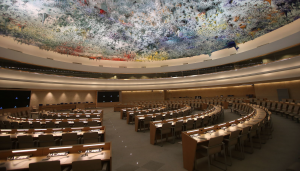 The official Palestinian news agency Wafa said Sunday that President Mahmoud Abbas informed Rima Khalaf by phone that she would receive the Palestine Medal of the Highest Honor in recognition of her “courage and support” for the Palestinian people.

A statement said Abbas “stressed to Dr. Khalaf that our people appreciate her humanitarian and national position.”

Khalaf, a UN undersecretary-general, resigned Friday after refusing to withdraw her report for the UN Economic and Social Commission for Western Asia.

Its authors concluded that “Israel has established an apartheid regime that systematically institutionalizes racial oppression and domination of the Palestinian people as a whole.”

The report was swiftly condemned by US and Israeli officials, and UN Secretary-General Antonio Guterres’ office said it had been published without any prior consultations and did not reflect his views.

Khalaf, a Jordanian who headed the Beirut-based ESCWA, said she couldn’t accept being subjected to pressure from Guterres to withdraw the report. The report has been removed from the commission’s website.

In Jordan, government spokesman Mohammed Momani described Khalaf as a patriot who has held senior positions in the kingdom.

“We in Jordan view international reports about what the Palestinian people are being subjected to, from daily restrictions to injustice, as something that is in their interest,” he said.

More than 4 million Palestinians remain under direct or indirect Israel rule half a century after Israel captured the West Bank, Gaza Strip and east Jerusalem in the 1967 Six-Day-War.

Repeated US-led attempts to negotiate a solution by setting up a Palestinian state alongside Israel, roughly in the 1967 lines, have failed.