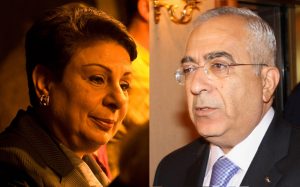 US Ambassador to the UN, Nikki Haley – PBS screenshot

“It is unconscionable that the US Ambassador to the UN, Nikki Haley, would block the decision of UN Security-General António Guterres to appoint former Palestinian Prime Minister Dr. Salam Fayyad as his envoy to Libya on the flimsy excuse that that ‘the UN has been unfairly biased in favor of the Palestinian Authority to the detriment of our allies in Israel,'” read the statement.

“It defies logic that the appointment of the most qualified candidate is blocked because it is perceived as detrimental to Israel. It constitutes a blanket license for the exclusion of Palestinians everywhere.

“Dr. Fayyad is a person of the highest standards of professionalism and integrity, and this move is a case of blatant discrimination against him on the basis of his nationality. It betrays unbridled bias against the Palestinian people as a whole whereby every Palestinian is guilty and punished because of his or her identity.

“We hope that saner voices will prevail and that the US will take back this irrational and discriminatory decision immediately and not deprive the UN of such a highly qualified individual. Rather, they should block petty acts of bigotry and vindictiveness and the further victimization of the Palestinian people for the mere fact of their existence,” concluded Ashrawi’s statement.

The United States blocked on Friday the appointment of the former Palestinian prime minister to lead the UN political mission in Libya, saying it was acting to support its ally Israel.

US Ambassador Nikki Haley said the Trump administration “was disappointed” to see that UN Secretary-General António Guterres had sent a letter to the Security Council indicating his intention to appoint Salam Fayyad, who served as the Palestinian Authority’s prime minister from 2007 – 2013, as the next UN special representative to Libya.

Dan Shapiro, until recently the US ambassador to Israel, also responded to the move with criticism. In a series of tweets, Shapiro stated that blocking Fayyad from the position is “stunningly dumb.” He added that “True it’s farce, ridiculous. But if you know Fayyad—decent, smart, honest, ethical, hardworking—it’s much more outrageous.”

Israeli Ambassador to the UN Danny Danon took a decidedly different, and positive approach to the move. “This is the beginning of a new era at the UN, an era where the US stands firmly behind Israel against any and all attempts to harm the Jewish State,” Danon said following the US decision to block Fayyad’s appointment. “The new administration proved once again that it stands firmly alongside the state of Israel in the international arena and in the UN in particular.”

Ever since her confirmation as US ambassador to the UN, replacing Obama appointee Samantha Power, cooperation between US and Israeli delegations has reportedly improved. A week ago, Haley met with her Israeli counterpart Danon, at his UN office.

Haley’s statement comes ahead of Israeli Prime Minister Benjamin Netanyahu’s scheduled meeting at the White House with President Donald Trump on Feb. 15, and was welcomed by Israelis.