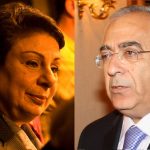 Six cities, two airports, a high-tech complex, a university and a system of highways to connect all of the above are included in the new Palestinian construction plan aimed at setting facts on the ground and creating a territorial continuity in the West Bank.

Dozens of sites in the West Bank are part of the new trend of construction, as the authorities refuse to wait for the revival of peace talks and are laying down the foundations and infrastructures for an independent state. Continue Reading »

As long as Fayyad was prime minister, it was almost impossible for Abbas and Fatah to lay their hands on the hundreds of millions of dollars of international aid. Unlike Fayyad, Hamdallah will serve as the obedient and faithful servant of Abbas, as well as the Fatah and PLO leadership. On the political arena, the appointment will have no impact whatsoever.

The appointment of Palestinian academic Rami Hamdallah as Palestinian Authority Prime Minister is a big victory for Mahmoud Abbas and his Fatah faction.

Hamdallah, who had served as president of An-Najah University since 1998, has been chosen by Abbas to replace Prime Minister Salam Fayyad, who decided to quit in April following years of tensions and disagreements with the Palestinian Authority president and Fatah. Continue Reading »

Outgoing Palestinian PM Salam Fayyad, who was quoted slamming the PA leadership, says he was misled by the NYT correspondent.

Salam Fayyad has denied criticizing the Palestinian Authority leadership in an interview with the New York Times.

In a statement published on Saturday by the Palestinian Wafa news agency, the prime minister’s office said that Fayyad “did not make any statements or conduct any interviews for the New York Times or any other newspaper or agency since his resignation.”

In an article published on Friday titled “Fayyad steps down, not out,” New York Times correspondent and columnist Roger Cohen quotes Fayyad as saying: “Our story is a story of failed leadership, from way early on… It is incredible that the fate of the Palestinian people has been in the hands of leaders so entirely casual, so guided by spur-of-the-moment decisions… we hold ourselves hostage to our own rhetoric.” Continue Reading »

Palestinian Prime Minister Salam Fayyad criticizes past & present Palestinian leaders and deeply regrets their historical decisions saying, ‘We don’t strategize, we cut deals in a tactical way and we hold ourselves hostage to our own rhetoric’.

In an exceptionally candid interview to the New York Times, Palestinian Prime Minister Salam Fayyad described the history of the Palestinian people as “a story of failed leadership, from way early on” 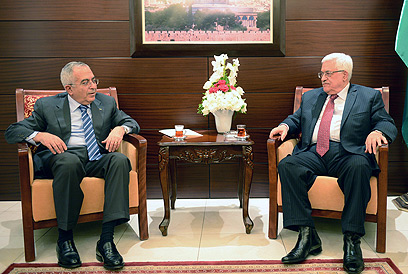 “It is incredible that the fate of the Palestinian people has been in the hands of leaders so entirely casual, so guided by spur-of-the-moment decisions, without seriousness,” he added. Continue Reading »

Now that Palestinian Authority Prime Minister Salam Fayyad has resigned, PA Chairman Mahmoud Abbas must form a government with the Hamas terror group, a high-ranking member of Abbas’s Fatah party said on Monday, according to an AFP report.

“The president must hold consultations with Palestinian movements to form a national unity government and set a date for elections,” Azzam al-Ahmed, a leader of the Fatah party, told Voice of Palestine radio.

Fatah, which controls the PA-assigned areas of Judea and Samaria, has been at odds for years with its bitter rival, the Hamas terror group that governs Gaza. Continue Reading »

Will PM Fayyad’s resignation be the beginning of the end for the PA?

It was actually Fayyad successes that eventually led to his downfall. His relative popularity, vision & effective management meant he was a threat to too many people.

The resignation of Palestinian Authority Prime Minister Salam Fayyad on Saturday is a dramatic development. Its ramifications won’t just reverberate in the part of the West Bank under Palestinian control, but also affect Israel and the Obama administration’s efforts to renew the peace process, as well as, the European Union’s policy towards the Palestinians.

For Israel’s government and defense establishment, the U.S., Continue Reading »

Abbas was due to return to the West Bank from Jordan on Thursday, and it was not immediately clear whether he would accept the resignation of the U.S.-educated economist.

In contrast to the cold Israeli reaction, the office of Palestinian PM Salam Fayyad released a statement saying that he “expresses his satisfaction with a main finding of a study … that confirms that Palestinian textbooks do not contain any form of blatant incitement, which is based on contempt towards the ‘other’.”

Controversy quickly engulfed a new study that said Palestinian textbooks do not incite hatred for Jews with Israel blasting the report — with some members of the report’s advisory panel claiming they were blindsided by its release.

Bar Ilan University Talmud professor Daniel Sperber, a member of the panel, slammed the decision to release the report when Israeli-Palestinian relations are strained and when Israel is in-between governments. Continue Reading »

PM Fayyad meets with Arab League leaders to find ways to receive the $100 million they promised the Palestinian Authority.

Palestinian Prime Minister Salam Fayyad warned Sunday that his government could fail to meet its obligations to its people because of a cash crunch, and urged Arab countries to deliver on promised aid.

Fayyad met with Arab League members to discuss ways to raise the $100 million they pledged earlier to his Palestinian Authority. Arab League chief Nabil Elaraby said seven countries have responded favorably, but he did not name them. Continue Reading »

‘Palestine’ PM Fayyad accuses Arab states of failing to uphold their promises of cash support, says his government close to being ‘ completely incapacitated’

The Palestinian self-rule government is close to being “completely incapacitated,” largely because Arab countries haven’t delivered hundreds of millions of dollars in promised aid, the Palestinian prime minister said in an interview Sunday. 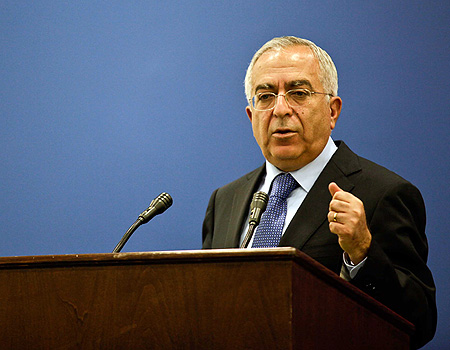 If allowed to continue, the Palestinian Authority’s unprecedented financial crisis will quickly double the number of Palestinian poor to 50 percent of a population of roughly 4 million, Salam Fayyad told The Associated Press. Continue Reading »

Mahmoud Abbas says: As long as I am in power, there will be no 3rd intifada

In interview with Israel’s Channel 2, PA President, Mahmoud Abbas says although he is a refugee from Safed, he supports a Palestinian state based on the 1967 borders & the rest, is Israel.

In an interview with Israel’s Channel 2, Abbas said that as long as he remains in power, he will not allow a third, armed intifada — or uprising — to break out. Continue Reading »