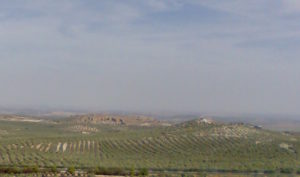 The Palestinian Authority (PA) has planted millions of olive trees in the West Bank in a ploy to lay claim to land and set facts on the ground, according to an internal report by the Israeli Civil Administration (ICA).

According to the report, which was written by the head of the Agriculture Department in the ICA and brought to light by the Zionist civil rights Lavi organization, the Palestinian Ministry of Agriculture has implemented a plan to take over land by planting olive trees.

“According to data collected by the Palestinian ministry, the space on which the trees were planted amounts to some 975,000 dunams (241,000 acres) on which 14.7 million olive trees have been planted, 11.9 million of which bear fruit,” the report said.

“The expansion of the cultivated area is due to the Palestinian Ministry of Agriculture’s flagship plan, which calls for the planting of a million olive trees (more than a million in practice),” the senior ICA official wrote.

“As part of the project, the ministry, together with other organizations, provided Palestinian farmers in Judea and Samaria with about 300,000 olive tree seedlings,” he explained.

There were plans in the past of a Palestinian agricultural takeover, but its scope was much smaller than the data presented in the report.

According to a special report by Regavim, a right-wing pro-settler organization, from 2013 to 2017, hundreds of new agricultural sites that cover thousands of dunams were added; and more than 150 new roads were created, stretching over hundreds of kilometers.

The implications of the Palestinians’ “land grab” tactics are significant and clear. According to the Land Law, which applies to the West Bank as well, continuous processing of land allows the farmer to claim ownership of that land. According to Regavim’s report, Palestinian agricultural activity focuses on areas near Jewish communities and constitutes a strategic asset, since agricultural activity cuts off future territorial contiguity.

“The planting of more than one million trees by the Palestinians should be seen as a million warning signs to the State of Israel, which has turned a blind eye to the illegal Palestinian takeover,” said Yishai Hamo, Regavim’s coordinator of operations.

The Coordinator of Government Activities in the Territories (COGAT) stressed in response to the report that “the document written by Samir Muadi, agriculture staff officer in the Civil Administration, was written as an internal report based on data compiled by the Palestinian Ministry of Agriculture. These figures are not verified by ICA officials.”

“We would also emphasize that the data relate to the entire Judea and Samaria area, including Areas A and B. Furthermore, since this data has not been verified, the ICA is working to examine and confirm the data. The Civil Administration will continue to enforce illegal incursions into state lands that do not include private lands in Area C,” the statement from COGAT read.