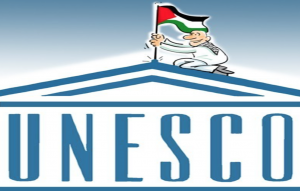 Ahead of Wednesday’s vote on another controversial anti-Jewish, Jerusalem resolution, Israel’s Ambassador to UNESCO said such threats & ultimatums only serve to reveal the true face of the Palestinians as “thugs” & “liars.”

The Palestinian Authority and the Jordanians have warned the 21-member states of UNESCO’s World Heritage Committee not to oppose or abstain from a Jerusalem resolution on Wednesday in Paris.

The resolution, which refers to the Temple Mount solely by its Muslim name of Al-Haram Al Sharif, is expected to be approved by the committee at its 40th session.

But in light of public statements on such resolutions made last week by Italy, Mexico and Brazil, the Palestinians want the resolution to pass by consensus, with the full support of all 21 member states of the World Heritage Committee (WHC).

PLO Urges Media Outlets & Journalists Not to Use the Term, ‘Temple Mount’

On Monday, they sent a letter to committee members asking them to submit their positions on the resolution by noon Tuesday.

Without pledges of a consensus approval, the Palestinians and Jordanians plan to resubmit a text with language that was even more problematic to Israel, explained Israel’s Ambassador to UNESCO Carmel Shama-Hacohen.

Wednesday’s vote, had initially been scheduled to take place in Istanbul in July, but the failed coup in Turkey cut that session short.

At the time, the Palestinians and the Jordanians had worked out a consensus text which they understood had the support of the European Union and the WHC.

In their letter, they reminded WHC members of this agreement and said, “At the beginning of the current WHC40 session, we learned that a few member states are still hesitant whether they can commit to our agreement in Istanbul or not.”

The Jordanians and the Palestinians said that they understood this “hesitance as a retreat from the consensual language.”

Shama-Hacohen said in response that “the Palestinians and the Arab states understand that after Mexico and Italy there might be more unpleasant surprises.”

“They are broadcasting a message that says don’t abandon us or we’ll burn the house down with extremist anti-Israel resolutions,” said Shama-Hacohen. He added that such resolutions would only cause tremendous damage to UNESCO, under whose umbrella the WHC operates.

Such threats and ultimatums only serve to reveal the true face of the Palestinians as “thugs” and “liars,” Shama Hacohen said.

Israel is in the midst of an intense diplomatic effort to prevent a consensus vote on the Jerusalem resolution, Shama-Hacohen said. “The letter and the ultimatum from the Arab states is a sign that we are going in the right direction,” he said.