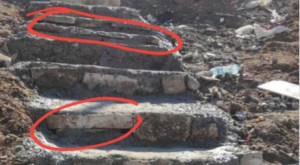 One Segev follower, Shai Lourie, tweeted that if such a thing had happened in Europe it would have opened all the news editions, but on Mount Olives it barely generates a yawn.

During the Jordanian rule (1948-1967), the Mount Olives Jewish cemetery suffered systematic damage to gravestones and tombs. As early as the end of 1949, Israeli observers stationed on Mount Zion reported that Arab residents began uprooting tombstones.

In 1954, the Israeli government filed a formal complaint with the UN General Assembly regarding the further destruction of graves and plowing in the area. In the late 1950s, the Jordanian army used tombstones to build military camps.

According to historian Mordechai Sofer, dozens of tombstones were completely transferred to the “tomb camp,” a Jordanian Legion military camp established in nearby al-Eizariya, where they were used as floors in tents and toilets.

The Hotel Inter-Continental Jerusalem was built on top of Mount Olives, and the access road to it was paved on top of graves, while the tombstones were shredded to gravel for use as raw material. When the Jordanians extended the road to Jericho, they demolished six rows of graves and threw the bones with the soil towards the lower, Sephardic section of the cemetery. Even after sorting out some of the bones, a large pile of earth remained.

Tomb of Zechariah on the Mount of Olives, Jerusalem. – Photo: JJ Jones, Wikipedia

Ancient tombstones that stood around the tomb of Zechariah were removed from the area in order to expand the access road to the village of Silwan. In his book “Against the Closed Wall,” Meron Benvenisti writes that tombstones were also transferred to the courtyard of the Citadel of David, where they were smashed and their fragments were used as markers for a parade ground.