Tag Archive for Mount of Olives

‘To Concede Mount of Olives, Is To Concede Jerusalem’

In special interview about Israel’s national cemetery, co-founder of the Int’l Committee for the Preservation of the Mt. of Olives (Har HaZeitim), reveals the full story of the Mount’s security concerns.

Menachem Lubinsky, co-chairman for the International Committee of the Preservation of Har HaZeitim, spoke to Arutz Sheva this week — and explained the true story behind the official policies at the Mount of Olives.

Menachem Lubinsky, co-chairman for the International Committee of the Preservation of Har HaZeitim – Arutz7 Screenshot

The Mount of Olives has become the “drug capital of east Jerusalem” and also was a spot for donkey races; the Palestinian Arabs neglected and abused the site, desecrating graves to a much greater extent than today. Continue Reading »

Jerusalem councilman King blames government for not ordering police to stop Arabs from destroying the headstones & desecrating Jewish graves at the Mount of Olives cemetery.

While Arab assailants have long been desecrating the Mount of Olives Jewish cemetery in Jerusalem, said to be the oldest still-in-use cemetery in the world, shocking video footage reveals that for the Jewish holiday of Purim last Friday (in Jerusalem) they went farther than usual in trashing Jewish graves.

Jerusalem Councilman Arieh King on Tuesday posted video documenting the damage, which was filmed by Joshua Wander, a dual Israeli and American citizen who has run as a republican candidate for mayor of Pittsburgh.

Dozen’s of Jewish Graves Desecrated by Mount of Olives Vandals

Even after millions of Shekels were spent on security cameras, Arab vandals again entered, this time destroying the grave-site of the Hassidic leader, the Grand Rebbe of Modzitz, along with dozens of others, including other well-known rabbis.

Arab vandals destroyed the gravesite of the Hassidic leader, the Grand Rebbe of Modzitz, according to Modzitz hassidim who visited the site. The gravestone of the leader, Rabbi Yisrael Dan Taub, who died in 2006, was destroyed, along with dozens of others, including several well-known rabbis. The destruction took place at a special section of the Mount of Olives cemetery reserved for rabbinical leaders. Continue Reading »

Rabbi Yitzhak Cohen reports of a harrowing attack, the full 40-minute assault highlighted the lack of police presence by the Mt. of Olives, a well known hotbed of Palestinian attacks.

By Tova Dvorin and Ari Soffer

Rabbi Yitzhak Cohen, whose son Neria Cohen was murdered in the Mercaz HaRav attack in 2008, was violently attacked by Arab youths as he visited his son’s grave on the Mount of Olives yesterday.

“Yesterday I went with my wife and children to my son’s gravesite,” the Rabbi recounted, in an interview with Arutz Sheva. “At the end of the road on Mount of Olives, I saw a group of Arab youths – they immediately began throwing stones at our car.” Continue Reading »

No additional police will be stationed until Defense Ministry confirms reported threat of danger.

A Knesset committee hearing regarding internal security issues at the Mount of Olives revealed that the roads to the historic site present a mortal danger to travelers and pilgrims. The Mount of Olives holds one of Judaism’s oldest cemeteries, and is the burial site of several prominent religious leaders.

The discussion, which was mediated by Likud MK Miri Regev, opened with a statement from MK Avraham Michaeli (Shas) that he is “afraid to go to the Mount of Olives” and that “when you go there, you find yourself in mortal danger.” Continue Reading »

Jewish Pilgrims Attacked by Arabs Next to Mount of Olives

By Uzi Baruch and Ernie Singer

A hareidi-religious family from New York was the victim of a serious attack by rioting Arabs Wednesday afternoon, asthey were making their way to pray on the Mount of Olives, east of Jerusalem’s Old City. One of the passengers

in their rented car was taken to Hadassah Mount Scopus Hospital with wounds to the head and one of his hands.

Area resident Nitai Shilo, who helped the family after the attempted lynch, told Arutz Sheva that the family, including children, got stuck in a big traffic jam next to the Mount of Olives. Continue Reading »

Arab Attacks on Mount of Olives are declining

Thousands of mourners expected to visit Mount of Olives cemetery in the week before Yom Kippur.

Thousands of people are expected to come to the ancient cemetery at the Mount of Olives in the days before Yom Kippur, to visit the graves of their loved ones and graves of “tzaddikim,” or wise and righteous people.

This year they can do so with less trepidation, activists say, because the security situation there has improved markedly in recent months. Continue Reading »

Stones thrown at firemen called to Mount of Olives

Firefighters who attempted to put out a dumpster fire were attacked on Saturday on the Mount of Olives in east Jerusalem, another stone-throwing attack in a series of incidents at the cemetery. 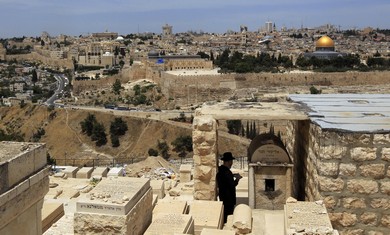 According to Jerusalem firefighter spokesman Asaf Abras, after a number of people started throwing rocks, the firefighters tried to reverse their direction but the “rain of stones” continued while a crowd formed at the scene.

Firefighters left the scene after the rocks smashed the windshield and other rocks damaged the sides of the firetruck.