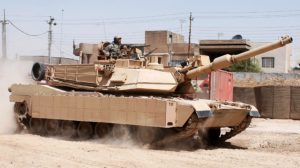 Designed to detect and neutralize incoming projectiles, the Trophy system has four radar antennae and fire-control radars to track incoming threats such as anti-tank guided missiles and rocket-propelled grenades. Once a projectile is detected, Trophy fires a shotgun-type blast to neutralize the threat.

Developed by Israel’s Rafael Advanced Defense Systems and Israel Aircraft Industries’ Elta Group, it is the only fully operational and combat-proven APS in the world.

Michigan-based General Dynamics Land Systems was contracted to add the system to an Armor Brigade Combat Team’s M1A2 SEPv2 at a cost of close to $10 million with an expected completion date by the end of March 2019.

With its troops operating in theaters such as Syria and Iraq, the US has understood that ground forces and armored vehicles are sitting ducks without active protection systems due to the proliferation of antitank weaponry in the hands of both state militaries and insurgent groups. Outside the Middle East, pro-Russian rebels in the Ukraine have been reported to be using Russian-made Kornet missiles, which can strike targets more than five kilometers away using a laser beam to direct the missile and which can pierce standard armor 1,000–1,200 millimeters thick.

Maj.-Gen. David Bassett, who is in charge of the US Army’s programs in the area of ground combat systems, was quoted by the DefenseTech website in August as ultimately envisioning “a brigade’s worth of capability of Trophy on the Abrams” – one of the most heavily armored vehicles in existence.

The Trophy System received its “baptism by fire” on March 1, 2011, when it neutralized an RPG antitank rocket fired from a short range toward an IDF Merkava Mark-IV tank close to the Gaza border.

The system has since proved its efficacy in several operations, especially during Operation Protective Edge when IDF tanks operated in the Gaza Strip without suffering any losses.