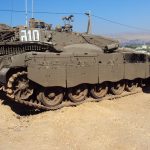 Having attempted to destroy Israel’s security infrastructure, IDF tanks retaliate after 2 Palestinians, without entering into Israel, started a brush fire that they hoped would incapacitate the operations of Israel’s electronic border fence with Gaza.

The Israeli army shelled two Hamas observation posts in the northern Gaza Strip on Wednesday after two Palestinians arrived at the border fence and started a fire, the Israel Defense Force (IDF) reported on Wednesday.

The suspects approached the Karni Crossing but “did not cross the fence nor infiltrate into Israel,” the IDF statement said.

“The IDF views with severity any attempt to damage and destroy the security fence and security infrastructure,” the statement ended. 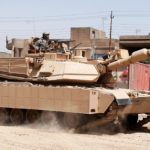 An IDF tank retaliates and fires at a Hamas position in Gaza; no IDF forces injured after reporting shots fired at them along the border with Gaza.
– Gun fire was also reported on Tuesday by IDF forces along the Lebanese border near Metula in the Upper Galilee; no injuries or damage were reported.

An IDF tank shelled a Hamas outpost in the center of the Gaza Strip on Tuesday in retaliation for two incidents of shooting at IDF forces earlier in the day.

No soldiers were injured and no damage was reported in the shooting, which took place towards soldiers along the border of the strip with Re’im, a nearby kibbutz. Continue Reading »

PM Netanyahu: “For the past 34 years we have been looking for our fighters and we will not cease until we can bring them to graves in the State of Israel. For these 34 years, the Katz, Feldman and Baumel families have not had a grave to visit. But now they will have this tank, a remnant from the battle of Sultan Ya’akov, that they can visit and touch, and which will let them feel their common memory.”

Prime Minister Binyamin Netanyahu and his wife Sara took part in an official ceremony for the return of a tank that had been captured by Syria during the 1982 war in Lebanon. Continue Reading »

With no sign of the three Israeli soldiers who manned the tank during the First Lebanon War at the Battle of Sultan Yacoub, Russia agrees to return the tank to Israel to be used as a memorial.

Prime Minister Benjamin Netanyahu expressed his appreciation on Sunday for Russian President Vladimir Putin’s signing of a presidential decree ordering the return of an IDF tank that was captured in 1982 during the First Lebanon War.

The captured Israeli tank currently on display at the Moscow Military Museum will return to Israel as the only reminder/memorial of the missing three IDF soldiers (inserted on photo) from the Battle of Sultan Yacoub.