Prime Minister Netanyahu also expected to raise issue for second time in meeting with US President.

Netanyahu officially asked Obama to commute Pollard’s life sentence to time served in January 2011. Since then, Obama has not responded.

Pollard’s wife Esther urged Obama to respond favorably to the repeated requests for the release of her husband, who has been in prison for more than 26 years. Tuesday will be his 9600th day behind bars.

“Jonathan’s release, Mr. President, will be a real medal of freedom for us and for all of Israel!” she said, noting the award Obama intends to give Peres. “Please send Jonathan home with Mr. Netanyahu.” 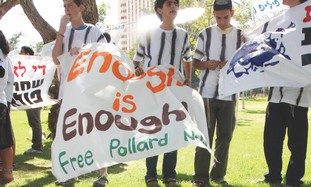