“Kennedy wanted to know why Isser Harel resigned. He bombarded me with questions, the third or fourth question was ‘are you producing nuclear weapons? Yes or no?’ I told him that Israel wouldn’t be the first to introduce nuclear weapons to the Middle East.”

Live broadcast from the U.S Congress : President Peres will receive the Congressional Gold Medal and delivers remarks before members of the House and Senate

On April 1, 1963, the man who was to become an Israeli icon had his first encounter with what would be a long list of American presidents.

On Wednesday evening, Peres will meet with 44th US President Barack Obama, and on Thursday he will appear in front of both Houses of Congress, to receive the Congress Medal of Honor.

And on the eve of siuch an honor, Israel’s ninth president reminisced about 50 years of meetings with 10 American presidents.

Throughout the decades, Peres’ meetings with American presidents have played a major role in Israel’s ability to form deep friendships with other nations. Nixon sent him all the books he had written, Bush senior hosted him at his summer home in Maine, and he and Reagan had regular joke-telling contests.

Peres’s first meeting with an American president was unexpected, given that high-level US officials do not usually summon the deputy defense minister of a foreign country.

“I came to Washington for meetings and to my surprise, President Kennedy invited me to the White House,” Peres recalls. “It was an informal meeting and they ushered me inside in through the back entrance. He immediately began to question me; the first inquiry being why (Mossad chief) Isser Harel had been fired that very same day.”

According to one assessment, Harel resigned after he opposed David Ben-Gurion’s instructions to halt the assassination of German scientists in Egypt.

During the meeting, Peres rebuffed Kennedy’s grilling about Israel’s alleged atomic plans, and noted that “Israel will not be the first to introduce nuclear weapons to the Middle East.”

“When we left the White House,” Peres recalled, “Ambassador Avraham Harman said to me, ‘How dare you say such a thing? Do you have permission from the government?’ I told him, ‘What do you want me to do, tell Kennedy to wait a minute and that I’ll ask Levi Eshkol? We needed to give an answer.

“Afterwards, Eshkol sent me a telegram saying, ‘in such cases, you should ask me what to do.’ I explained that I didn’t know that Kennedy would ask me that.” The answer that Peres gave Kennedy actually came to define Israel’s policy of nuclear ambiguity, which still exists to this day.

Peres next met Kennedy’s successor, Lyndon B. Johnson, when, still in the role of deputy defense minister, he accompanied Eshkol to a meeting with the 36th president. The Israeli prime minister went to the US with a “shopping list” for the IDF, determined to break the weapons embargo that the UN had imposed on Israel since the War of Independence in 1948.

“We landed in Philadelphia,” Peres recalled. “We didn’t want to arrive in Washington before reaching an agreement ahead of the meeting on military and economic aid. I’ll never forget that night.

“Ambassador Harman was negotiating in Washington, and we didn’t want to get there before knowing what was agreed. We applied pressure, we didn’t want any surprises, and we sat all night and argued with the Americans, The debate was about that fact that Johnson had given tanks to the Germans and not to us.”

On that night, cracks began to appear in the US arms embargo. “The agreement was that the Germans would transfer tanks to us from American warehouses in Europe,” the president explained. “And after reaching the agreement, we flew to Washington bleary-eyed from lack of sleep.

“Johnson was as big as a pyramid, and there was a huge glass of milk on the table next to a red phone. Johnson said, ‘The United States stands behind you unequivocally.’ Then Eshkol could relax and crack a joke in Yiddish. Subsequently, 150 Patton tanks were transferred to Israel.” 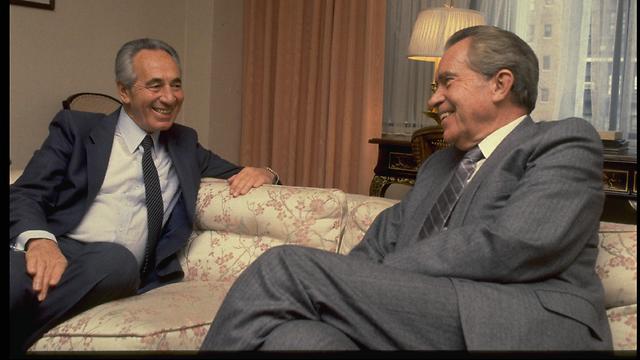 Regarding the 37th US President, Richard Nixon, Peres said that he was the one who gave American foreign aid to Israel for the first time. “We established friendly relations and he made sure to send me all the books that he wrote.”

Peres knew the 39th president, Jimmy Carter, from when the latter served as governor of the State of Georgia. “I sent him a copy of my book, ‘David’s Sling.’ He invited me to Georgia to visit a Hercules factory, and that’s how we made the deal to purchase the cargo aircraft that we made use of in Operation Entebbe. We had good relations; without Carter we wouldn’t have a peace agreement with Egypt – what he did was brilliant.”

“He was a charming, captivating man, with extraordinary communication skills,” Peres recalled. “He sent me a man who worked with the CIA to deal with the Iran-Contra affair. Reagan asked us to help him release two or three American hostages in Iran. In return, he offered TOW missiles, and after that things got complicated.” 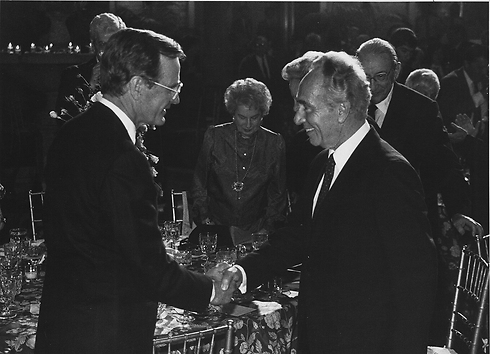 When asked about President George Bush senior, Peres looks back fondly on someone with whom he “had an exceptional relationship.”

“I have letters from Bush senior that you wouldn’t believe. He writes to me like a friend. I was on good terms with his wife Barbara, who has a great sense of humor. He invited me to their summer home in Maine. Bush himself came to pick me up from the airport.”