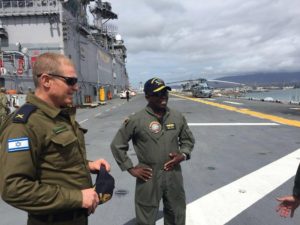 The 2018 Rim of the Pacific Exercise was carried out by select naval units from 26 countries, in a massive maritime exercise in which the ‘enemy’ threatens a critical sea route, similar to a scenario where the Strait of Hormuz is being threatened by Iran.

Since the early 1970’s, the exercise is held every couple of years, and simulates a naval maneuver with the participation of an international task force.

Each time, more fleets take part in the maneuver as long as they follow RIMPAC’s entry requirement and observe the previous exercise. After observing the previous one, this is the very first time the Israeli Navy takes part in the maritime drill as an active participant.

The exercise was led by the US Navy. Its main participants were Australia, Canada and Chile. Amongst this year’s participants are countries like such as Malaysia and Indonesia with whom Israel has no political ties.

Besides Israel, this was the first time for the naval commandos of Vietnam and Sri Lanka.

Because of the enormous distance, close to 10,000 miles away, Israel didn’t send its own ships, but rather joined the commanding team at the heart of the drill—the central command room at the second biggest naval base in the US, the Joint Base Pearl Harbor Hickam (JBPHH), in Hawaii. The exercise lasted about a month and ended two weeks ago. These days, the Israeli Navy is drawing its necessary conclusions.

The exercise simulated a relevant than ever combat scenario, in which a critical maritime route—similar to the Strait of Hormuz, which Iran threatens to intercept—is blocked.

The RIMPAC exercise also simulated a large American enemy force equipped with sea vessels spread in the sea and along the coast. The commandos, that included tens of thousands of combat soldiers and officers, split into large combat units, whose goal was to destroy a terrorist organization that had taken over two out of the five islands adjacent to Hawaii.

The international coalition forces fought against the terrorist organization according to an intelligence scenario that evolved during battle.

After the initial stage of preparation and making acquaintance with the various delegations, the forces move on to the next stage—basic training and formulating the order of battle.

Part of the mission was to communicate with and synchronize the different task forces, each consisting of about ten ships, including frigates and aircraft carriers from five to seven countries.

In the third and main stage of the exercise, dubbed as “free play,” the task forces attacked the terrorist organization with fighter jets, land forces composed of 18 countries, including the American Marines arriving from the Carl Vinson supercarrier.

“At the command post in Hawaii, we dealt with intelligence gathering, the planning of operations and the immediate operations. Alongside us, the participants included officers from the United States, Germany, Chile, Peru, Australia, Bronay, Singapore and Thailand,” Major Ran Steigman, who had a central role in the drill, told Ynet.

Besides Steigman, the head of the Navy’s Shipyards, Brigadier General Ido Ben Moshe, the naval attachés in Washington, Col. Amir Gutman, and the commander of the Israeli naval commando in charge of the INS Yaffo ship, Major Ran Koval.

“The level of difficulty in such exercises is much higher. Officers from different armies saw the Israeli flag on my uniform, turned to me and expressed great appreciation for the navy and the IDF for our achievements since the Six-Day War,” Major Steigman said.

“The Israeli delegation in the next exercise would be bigger, and American officials told me they want us to send ships as well. It is more likely that we will send land forces, such as rescue and rescue teams and combat troops. It was an amazing experience with that benefited all participants,” the Major added.

All photographs are courtesy of U.S. sponsored, Rim of the Pacific Exercise (RIMPAC).
Visit their Facebook page for more photos and video clips: RIMPAC