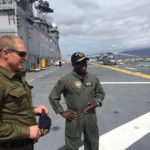 The 2018 Rim of the Pacific Exercise was carried out by select naval units from 26 countries, in a massive maritime exercise in which the ‘enemy’ threatens a critical sea route, similar to a scenario where the Strait of Hormuz is being threatened by Iran.