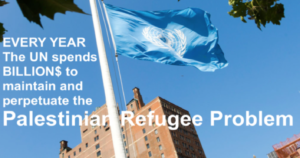 The Palestinians are also concerned about the recent decision of the Netherlands, Switzerland and Belgium to temporarily suspend funding for UNRWA in the aftermath of allegations of graft and sexual misconduct among the its senior management.

PLO Secretary-General Saeb Erekat on Saturday called on UN Secretary-General Antonio Guterres to expedite the completion of the current investigation into suspicions and allegations of corruption in UNRWA before the opening of the 74th session of the UN General Assembly in New York on September 17. In the past year, UNRWA has fundraised at the opening session.

“An investigation is ongoing,” and the UN Secretary-General is “committed to acting swiftly upon receiving the full report,” UN spokesperson Farhan Haq told reporters in New York two weeks ago.

Haq spoke in the aftermath of an Al-Jazeera article, which said it had received a copy of a 10-page internal UNRWA report that allegedly fingered UNRWA commissioner-general Pierre Kranhenbuhl, deputy commissioner-general Sandra Mitchell, chief of staff Hakam Shahwan and senior adviser to the commissioner-general Maria Mohammedi, and called for their removal. Mitchell and Shahwan left UNRWA in July.

Pierre Krähenbühl, Commissioner General for the United Nations Relief and Works Agency for Palestine Refugees in the Near East (UNRWA) – UN Video screenshot

The report accused the UNRWA officials of nepotism and alleged they had created an atmosphere of fear, bullying and intimidation, indicating that the problems became more acute in 2018.

Erekat’s appeal reflects growing concern among Palestinians that the corruption scandal may affect UNRWA’s services to Palestinian refugees and pave the way for ending the agency’s mandate.

UNRWA was created in 1949 and its mandate is renewed every three years by the UN General Assembly, where it has enjoyed enormous support in the past.

In July, Haq told The Jerusalem Post that the mandate will be “debated and voted on by the Fourth Committee in November and then voted by the GA Plenary in December.”

Erekat said in a statement that the “stability of UNRWA and its programs this year is more important in the period leading up to the meeting of the UN General Assembly’s Fourth Committee,” also known as the Special Political and Decolonization Committee, which deals, among other things, with matters related to UNRWA.

Erekat expressed regret that US President Donald Trump’s administration has “politicized the great work that UNRWA is doing in an effort to eradicate the issue of Palestinian refugees.”

Erekat pointed out that after the Trump administration’s decision to halt funding to UNRWA, “more than 40 UN member states have made additional pledges, which means that they recognize the importance of services provided by UNRWA and its important role in maintaining regional stability.”

Last year, the Trump administration announced that it was ending all funding to UNRWA, describing the agency as “irredeemably flawed.” In 2017 the US was the largest donor to UNRWA, providing it with some $350 million.

Erekat said he sent letters to the foreign ministers of the Netherlands, Belgium and Switzerland, in which he expressed deep regret over their decision to suspend financial aid to UNRWA “due to unproven allegations.” He demanded that these countries refrain from “endangering UNRWA programs, even if this was only a temporary measure due to the sensitive circumstances.”

Erekat warned against politicizing the issue of UNRWA and said that could plunge the region into further tension and instability. “Half a million Palestinian children depending on your regular contributions cannot suspend their classes pending the results of the investigation,” Erekat said in his letter to the three countries.

“While you have announced your suspension of UNRWA assistance because of the leaked report, you have not yet announced any accountability measures regarding continued and systematic Israeli violations of UN resolutions and international law, and you still allow Israeli settlement goods to enter your markets, and this applies to companies and institutions that are in collusion with the occupation.”

Erekat said he expects the three countries and “all peace-loving states to take concrete measures of accountability in this direction to promote the realization of the long-awaited inalienable rights of the people of Palestine, first and foremost their right to self-determination.”

He added that support and funding of UNRWA needs to continue, “because UN Resolution 194 has not yet been implemented, the right of return and compensation has not been materialized, and in the absence of a just political solution to the Palestinian refugee issue.”

Adopted in 1948, UN Resolution 194 states that “refugees wishing to return to their homes and live at peace with their neighbors should be permitted to do so at the earliest practicable date, and that compensation should be paid for the property of those choosing not to return and for loss of or damage to property which, under principles of international law or equity, should be made good by the Governments or authorities responsible.”

Erekat also sent letters to the Arab League and the Organization of Islamic Cooperation in which he expressed the Palestinian leadership’s concern about the timing of the leak of the report on the corruption investigations – ahead of the UN General Assembly meeting in September.

Erekat claimed that the timing of the leak was “consistent with US and Israeli efforts to dry up the resources of UNRWA “in preparation for the liquidation of the issue of refugees and for resettling Palestinian refugees in host countries.”

The Palestinian position, Erekat said, is “to refrain from politicizing humanitarian aid or linking corruption cases to the suspension of funding for UNRWA, but to strengthen mechanisms of control, accountability and supervision.”

He added: “The decision of the Netherlands, Switzerland and Belgium undermines the rights of Palestinian refugees, and is likely to increase their suffering in light of the already deteriorating financial crisis after the decision of the Trump administration to stop its financial contributions.”

Erekat called on the Arab League and the Organization of Islamic Cooperation to address the countries of the world and “urge them to continue to provide financial support as a legal and moral obligation until a just solution to the refugee issue in accordance with UN resolution 194” and to vote in favor of renewing the mandate of UNRWA.

“The danger posed by these countries’ decisions could have serious consequences for a possible escalation in reducing international support for UNRWA,” Erekat cautioned.