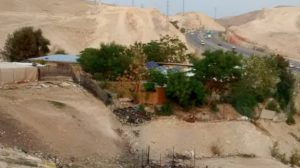 National security adviser John Bolton talks about the International Criminal Court, the PLO and the US supporting Israel.

Last week, he Israeli Supreme Court ruled on Wednesday against the residents of Khan Al Ahmar, which was built next to an Israeli town east of Jerusalem, giving a green light to the outpost’s demolition.

In the judgment, Judge Anat Baron wrote that “it is possible to understand the petitioners’ wishes to avoid the evacuation, and the difficulty involved in moving from the place where they set up their home to a new location is clear, but this is illegal construction. And given the circumstances of the case there is no legal basis for judicial intervention in the manner in which the state chose to enforce the law on the petitioners.”

Shortly after the decision was announced, Defense Minister Avigdor Liberman welcomed it.

“Khan al-Ahmar will be evacuated!” He wrote into his Twitter account. “I congratulate the High Court justices on a courageous and obvious decision – in the face of an orchestrated hypocrisy of Abu Mazen, the left and the European countries.”

The Regavim movement, which also filed a petition regarding the demolition of the village, expressed its satisfaction with the judges’ decision: “The High Court of Justice ruled that the PA cannot be allowed to undertake the hostile takeover of Israeli-controlled land in Judea and Samaria.”