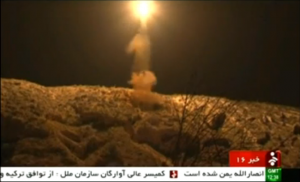 Defense Minister Avigdor Liberman said Israel was not worried by the Iranian strike, being their first strike outside its own territory in nearly 30 years. “Israel is prepared for every development, we have no concerns or worries.”

Prime Minister Benjamin Netanyahu warned Iran not to threaten Israel on Monday, hours after the Iranian army fired ballistic missiles at a Syrian base of the Islamic State.

“I have one message for Iran: Don’t threaten Israel,” Netanyahu said, reported AFP.

Iran’s Revolutionary Guard said it fired six missiles targeting “terror bases” of the Islamic State in eastern Syria on Sunday. It was in apparent retaliation for an earlier attack carried out by the group, in which 17 people were killed.

Netanyahu often warns that Iran presents a threat to Israel and world stability. Iran’s missiles also have the capability of striking Israel.

“This activity also includes their attempts to establish themselves in Syria and, of course, to transfer advanced weapons to Hezbollah and other operations,” Netanyahu told members of his right-wing Likud party at a faction meeting on Monday.

The missile attack on Syria was Iran’s first strike outside its own territory in nearly 30 years, the Times of Israel reported.

Netanyahu has warned about Iran for years and he strongly opposed the American-brokered nuclear deal that lifted sanctions on Iran in 2015.

Israel, which is widely assumed to acquire nuclear weapons, said that the Iranian nuclear program also sought the same goal.

Contrary to the prime minister, Defense Minister Avigdor Liberman said Israel was not worried by the Iranian strike.

“Israel is prepared for every development,”  Liberman told members of his right-wing Yisrael Beitenu party on Monday.

“We are prepared, we have no concerns or worries.”