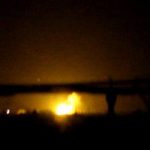 The Syrian defense systems “engaged and destroyed ‎hostile targets” near the capital of Damascus, the report said.

IAF jet takes off on mission to defend Israel. 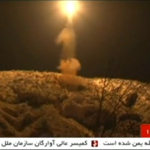 Defense Minister Avigdor Liberman said Israel was not worried by the Iranian strike, being their first strike outside its own territory in nearly 30 years. “Israel is prepared for every development, we have no concerns or worries.”

Prime Minister Benjamin Netanyahu warned Iran not to threaten Israel on Monday, hours after the Iranian army fired ballistic missiles at a Syrian base of the Islamic State.

“I have one message for Iran: Don’t threaten Israel,” Netanyahu said, reported AFP.

Kuwaiti paper reported on Saturday that an (unnamed) Israeli minister with good ties to White House, ‘revealed the attack plan to John Kerry.’

The Bethlehem-based news agency Ma’an has cited a Kuwaiti newspaper report Saturday, that US President Barack Obama thwarted an Israeli military attack against Iran’s nuclear facilities in 2014 by threatening to shoot down Israeli jets before they could reach their targets in Iran. According to Al-Jarida, the Netanyahu government took the decision to strike Iran some time in 2014 soon after Israel had discovered the United States and Iran had been involved in secret talks over Iran’s nuclear program and were about to sign an agreement in that regard behind Israel’s back. “They know that aggression against the Islamic Republic of Iran would mean annihilation of Tel Aviv and spread of war into the United States,” the commander, Massoud Jazayeri, was quoted by the Fars news agency as having said. Continue Reading »

Iranian General Suggests that Israel is Close to Striking It

Iran believes that Israel is close to stiking its nuclear facilities, according to a report in Lebanese newspaper Al Jumhuriya, cited by Maariv/NRG. According to the report, a senior Iranian official recently visited Hezbollah leader Hassan Nasrallah in his hideout in the Dahiya section section of Beirut to discuss this assessment.

A senior military source confirmed to the Lebanese newspaper that the meeting had, indeed, taken place, but said that it had not been held inside the Dahiya – a neighborhood controlled by Hezbollah – but outside it. Continue Reading »

Obama: Commitment to Engage Iran in Return for Peace Talks

U.S. President Obama promised Israeli PM Netanyahu to take direct action against Iran “within months,” but did not elaborate on details.

The source said, however, that Obama did not reach a specific agreement with Netanyahu, but gave only a general commitment. The source added that it was not clear if the commitment was given in exchange for the very fact that Israel-PA negotiations are being held, or if it is conditional on their success. Continue Reading »

Iran has so far said it is not legally obliged to expose non nuclear site to int’l inspectors, but, Deputy FM Ghashghavi lays down condition for IAEA access to military site where nuclear activity is suspected, according to Iranian news agency.

Iran has said it will allow the International Atomic Energy Agency to inspect a military site near Tehran if threats of Israeli attacks on the country’s nuclear facilities are defused, an Iranian news agency reported Thursday.

The base in Parchin where Iran conducted nuclear tests. – Photo: Google Earth, GeoEye

Iran and the IAEA – the United Nations’ nuclear watchdog – plan to continue negotiations in mid-January on inspecting the Parchin military site, where, according to Western intelligence reports, nuclear weapons parts have been tested. Continue Reading »

U.S. officials recently alerted Jerusalem that Jordan & Egypt may annul their peace treaties with Israel if it attacks Iran.

U.S. officials recently warned Israel that Egypt and Jordan could annul their peace treaties with the Jewish State if it carries out a preemptive strike against Iran, AFP reported on Thursday based on a report in the Yediot Achronot daily newspaper. Quoting a high-level Israeli official, the newspaper said Washington had warned the Jewish state that Arab leaders would not be able to control an angry public backlash if Israel were to mount an attack on Iran. Continue Reading »