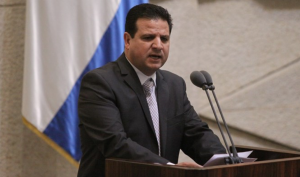 Joint List chairman MK Ayman Odeh responded to the video and said, “I watched the video tonight and I asked myself whether this is the same person who tried desperately to prevent the economic plan for Arabs, who tried to add more conditions to the program so that it would not be implemented? Is this the same Prime Minister who incited against us in the elections and since then has only worsened his inciting statements?”

“When I saw you chose to contact us in English,” he continued, turning directly to Netanyahu, “I understood exactly where this message is intended and for what purpose. So I say to the Prime Minister on behalf of the Arab public that we are not buying his show of hypocrisy.”

MK Ahmed Tibi blasted the video as well, saying, “Mr. Netanyahu’s passionate appeal to the residents of Rahat and Taybeh in English brings upon a smile and raises questions about the background of this spin. If you saw some shaking in the video it’s because the video guy couldn’t stop laughing. Netanyahu did not even apologize for his past racist remarks, and only ‘apologizes if his words were misunderstood.’ Again the Arabs (and Jews) did not understand his thoughts.”

“I wonder whether the motive is criticism by the OECD or another international body. He and his government are personally responsible for the huge disparities between Arab and Jewish communities and he is the one who boasts about destruction of homes rather than real integration. This spin will not hold water either,” said Tibi.