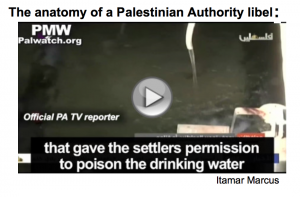 While Palestinian Authority President Mahmoud Abbas publicized this canard during his recent speech at the European Union parliament last week, the notion that Jews are poisoning Arab water supplies has become a prominent feature in local PA media outlets.

For example, last Monday a reporter on PA state television claimed that a non-existent religious council had been outed for promoting the poisoning of Arab water supplies.

“An Israeli human rights organization has exposed a religious ruling issued by Rabbi Shlomo Melamed (sic), Chairman of the Council of Settlement Rabbis (sic), that gave the settlers permission to poison the drinking water and the natural wells in the [Palestinian] villages and towns throughout the West Bank.”

The report, which cites a fictitious rabbi and non-existent council, is only one of the more recent cases of the well poisoning libel receiving official government sanction.

The PA Ministry of Foreign Affairs went so far as to warn that there will be thousands of Palestinian deaths, and condemned the international community for its silence on the matter.

But where do such intricate blood libels originate?  The Palestinian Media Watch, which monitors anti-Semitic incitement in the Palestinian Authority, has researched different sources to demonstrate just how this canard has evolved and expanded over the past two weeks.

Stage 1- The libel is seeded

This latest libel started roughly two weeks ago, when Yehuda Shaul, a leader of the extreme left-wing Israeli NGO named ‘Breaking the Silence’, told foreign visitors in a private lecture that Israelis – “settlers” – had “poisoned” all the water of a Palestinian town a number of years ago causing the Palestinians to leave:

“This village, actually, it’s new, but they came back because a few years ago, the settlers basically poisoned all the water systems of the village.”

Stage 2 – PLO expands the NGO’s story, from a single event “years ago” to a pattern of behavior

The PLO’s expanded libel rewrote the NGO’s story about an alleged “poisoning” of one water system that supposedly happened a few years ago into the libel that Israelis are now, in 2016, poisoning all the water sources “throughout the West Bank.”

In addition, they created another fictitious story that Israeli TV had reported on a religious ruling “a year ago” by an unknown Rabbi Shlomo Melamed “giving the settlers permission to poison the drinking water… throughout the West Bank.”

The PLO’s National Bureau to Defend the Land and Resist Settlement later amalgamated the various fabrications into a single narrative.

“An Israeli human rights organization has exposed that Jewish settlers are working intently on poisoning the drinking water in the Palestinian towns and villages throughout the West Bank. Yehuda Shaul, founder of the organization Breaking the Silence… said that the goal of poisoning the water is to cause ‘the local Palestinians to leave their villages and towns, so that the settlers will be able to take control of their lands.’…

It should be noted that an investigative report that was broadcast on the Israeli [TV] Channel 10 around a year ago exposed that Rabbi Shlomo Melamed, chairman of what is known by the name ‘Council of Settlement Rabbis’ (Ed. note: no such rabbi or body exists), issued a religious ruling giving the settlers permission to poison the drinking water and the naturally flowing wells [of Palestinians] throughout the West Bank.”

No such council – or rabbi by the name of Shlomo Melamed – exists.

“This call by Rabbi Mlmad [sic] is considered a crime against humanity because it targets humans, animals, corps and all forms of life in the occupied Palestinian territory.”

Stage 4- Official PA TV News ‘confirms’ the libel, claims it was made not by a lone ‘rabbi’, but by the entire fictitious ‘council’.

Last week PA state television expanded the libel even further, claiming that the religious edict permitting the poisoning of Arab wells was not issued by a rogue rabbi, but was sanctioned by the entire religious council he is supposedly affiliated with.

“The Council of Settlement Rabbis (sic) has called to poison the drinking water in all districts of the homeland [Palestine], in order to cause [Palestinian] residents to emigrate, or in order to kill them.”

Again, the same ficticious religious council and non-existent rabbi are cited to give the canard the appearance of legitimacy.

The Lie Heard Around the World

With PA state television and government ministries giving legitimacy to libelous claims, foreign governing bodies took the canard at face value. The Arab League even issued a formal condemnation of Israel for the supposed practice of poisoning Arab wells.

“The Arab League strongly condemned the call of the chairman of the Council of Settlement Rabbis, Rabbi Shlomo Melamed,” said a Wafa news report, “which gives the settlers permission to poison the drinking water that sustains the Palestinian towns and villages throughout the occupied West Bank.”

Finally, it should be noted that even the left-wing Israeli NGO upon which the PA based its story has denied the “the poisoning of the wells” story.