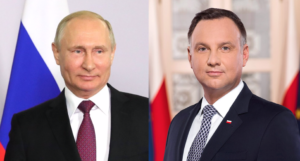 Duda told Polish television station TVP on Sunday night: “I found out that the presidents of Germany, France and Russia, whose countries collaborated with Nazi Germany, will give speeches.”

“I think that as President of Poland, I can speak about the suffering,” he stated.

About 40 leaders from around the world are expected to attend the event at Yad Vashem on January 23; only Israeli leaders and heads of the world powers during World War II will give speeches.

Poland has sought greater world recognition in recent years of the millions of Polish victims of World War II and of communism.

A spokesman for Duda, Krzystztof Szczerski, further clarified his conditions for attending the conference in an interview with Polish Radio One over the weekend.

Szczerski said Poland told Israel that having Putin as one of the speakers is “unacceptable,” due to his “insulting and deceitful claims about the course and the origins of World War II.”

The comments came after a Polish newspaper reported that Duda will not attend the event; the president, however, said that he is still undecided.

Duda’s ultimatum comes after weeks of back-and-forth between Poland and Russia over who is to blame for World War II.

The spat began with a recent European Parliament resolution blaming the August 23, 1939 Molotov-Ribbentrop Non-Aggression Pact for the outbreak of World War II eight days later. Nazi leader Adolf Hitler and Soviet dictator Joseph Stalin had secretly agreed to divide Poland and the Baltic states between Germany and the Soviet Union.

The Wehrmacht invaded Poland from the west, south and north on September 1, 1939, and the Red Army occupied Poland, Lithuania, Latvia and Estonia from the east on September 17, 1939. Stalin subsequently deported 1.7 million Poles and 200,000 Balts to the Soviet Union, many to the gulag.

Putin argued that Western appeasement of Hitler brought about the war, calling the European Parliament resolution “sheer nonsense,” and that the Soviet Union was forced into the non-aggression agreement to stave off a German attack because Britain allowed Hitler to annex Czechoslovakia.

The Russian president also said that Józef Lipski, the Polish ambassador to Berlin at the time, “expressed full solidarity with Hitler in his antisemitic views.”

After Germany invaded the Soviet Union in 1941, the latter fought the war on the Allies’ side. About 27 million Soviet soldiers and civilians died to free Europe from the Nazis’ grip, although exact figures are disputed.

Invaded by both Nazi Germany and the Soviet Union, Poland considers both countries to be aggressors responsible for the suffering and death of millions of Poles.

Polish Prime Minister Mateusz Morawiecki said: “Our country was the first to experience the armed aggression of Nazi Germany and Soviet Russia. Resistance to these evil powers is not only the memory of Polish heroism – it is something much more important. This resistance is the legacy of the entire now free and democratic Europe that fought against these two totalitarian regimes… Poland must stand up for the truth.”

Morawiecki argued that Hitler and Stalin “were not only allies but in fact friends,” who repeatedly cooperated.

The dispute between Putin and Morawiecki also comes as Poland has argued that their people played no significant role in the Holocaust. Warsaw takes particular offense at the phrase “Polish death camps” being used to describe concentration camps located in what is now an independent Poland but was then occupied by the Nazis.

In 2017, Poland enacted a law making it illegal to accuse Poland or the Polish people of being responsible for World War II or the Holocaust. The legislation originally carried a jail sentence, which was then canceled. Many Israeli officials condemned the law, including President Reuven Rivlin, who said that Poland and the Poles “had a hand in the extermination” of the Jews in the Holocaust.